Philip Wyndham has never envied his older brother for being the heir to Edenbrooke. He would much rather carve out his own destiny than live under the constraints of that position. But when his older brother dies unexpectedly, Philip's life is turned upside down as duty requires him to give up the life he planned. Philip takes on his new role as the most sought-after bachelor in London with alternating reluctance, boredom, and resentment. But all that changes the night fate leads him to an inn, where he meets the incomparable Marianne Daventry.

Ahhh. This but a sweet novella of dearest Philip Wyndham, a character I fell in love with years ago and came to love all over again.

Heir to Edenbrooke is a nice novella in Philip’s point of view before and until just after he meets Marianne Daventry.

It is interesting to see how he takes his brother’s death and his sudden inheritance. It definitely wasn't considered a blessing to him, and now we finally know why.

This is a sweet addition to Edenbrooke that gives us the history of this beautiful place, which didn't always have such a beautiful past.

The Tournament at Gorlan: A Review (Ranger's Apprentice: The Early Years #1) 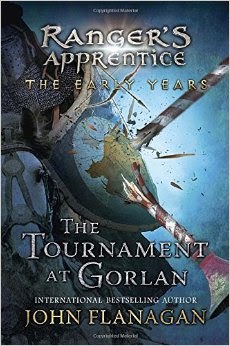 When Halt and Crowley discover that the ambitious Morgarath has been infiltrating the Rangers in order to corrupt the Corps, the young Rangers travel north to find Prince Duncan, seeking a royal warrant to stop Morgarath before it is too late. By weakening the Rangers, the most powerful force in support of the King, Morgarath plans to steal the throne.

Yet when Halt and Crowley arrive in Gorlan, they discover just how close Morgarath’s scheme is to success. Morgarath has a plan to discredit the Prince and alienate him from his father. At the same time, the Baron of Gorlan has been conspiring to win the trust and admiration of the Council of Barons to further his plan. If the young Rangers are to prevent the coup from succeeding, they will have to tread a dangerous path, which leads them to a thrilling climax at the annual tournament at Gorlan, where a series of bitter duels must be fought and won.

This origin story brings readers to a time before Will was an apprentice, and lays the groundwork for the epic battles that will culminate with The Ruins of Gorlan and The Burning Bridge—Books 1 and 2 of the Ranger’s Apprentice series.

Can I just say how stupid excited I was when I saw this book laying on one of Barnes and Noble’s display tables?! Dang John Flanagan! Back at it again with the Rangers!!! I had to get it. And so I did. And read it immediately I did.

Ranger’s Apprentice has been a series I have held so very close to my heart for years now. I was also very sad to say goodbye to the series when the 12th book came out. Now, however, I have the early years and the adventures of Halt and Crowley to look forward to!! Just the fact that I don't really have to say goodbye to this world makes me so incredibly happy.

Oh, it was so great to see young Halt and Crowley band together the exiled Rangers together and plot against the evil Morgarath. Their humor and friendship among the Rangers warmed my heart and made them such real, tangible characters. Ah! The jokes they have even when times get hard, they know how to lift each other up and plan how to infiltrate a castle and kidnap someone. It's great.

It was also really cool to see Prince Duncan before his King days. We don't see him all that much in the original series, so it was cool to see how he started to become the great King he will be.

Plus, having read the original series and knowing the impact Morgarath had on the country, I'm very interested to see what happened during Halt’s golden days. We only saw a small part of Morgarath’s destruction in Will’s story, now we’ll finally see the giant underwater mountain of the glacier we've seen.

I give this book a 5 out of 5. Honestly, John Flanagan never lets me down! 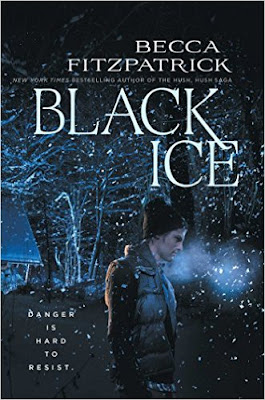 Danger is hard to resist in this sexy thriller from Becca Fitzpatrick, the New York Times bestselling author of the Hush, Hush saga.

Britt Pheiffer has trained to backpack the Teton Range, but she isn’t prepared when her ex-boyfriend, who still haunts her every thought, wants to join her. Before Britt can explore her feelings for Calvin, an unexpected blizzard forces her to seek shelter in a remote cabin, accepting the hospitality of its two very handsome occupants—but these men are fugitives, and they take her hostage.

Britt is forced to guide the men off the mountain, and knows she must stay alive long enough for Calvin to find her. The task is made even more complicated when Britt finds chilling evidence of a series of murders that have taken place there…and in uncovering this, she may become the killer’s next target.

But nothing is as it seems, and everyone is keeping secrets, including Mason, one of her kidnappers. His kindness is confusing Britt. Is he an enemy? Or an ally?

Honestly, I don't really know what to make of this book.


It obviously is about a kidnapping, which in an of itself tells you right away that I'm going to talk about the bad guys themselves. I will admit right off (and this is NOT a spoiler) but I had no idea who truly was the bad guy all along. It's a question throughout the whole book, is one guy not as bad as we thought or is he worse? It's so mind tripping. In hindsight, I probably should have known, but I liked that I ended up being surprised.

Regardless, I liked how the main girl, Britt, wasn't helpless. Had she been helpless I probably wouldn't have liked this book as much, but she knew how to handle herself and her friend. (I do give her bonus points on being witty and clever during a very terrifying time. If I were in her place, I hope I could think that fast on my feet). Despite being stuck in the Tetons during a blizzard, Britt navigates herself around Mason, Shaun, and Calvin as she fights her way to freedom.

There was a nice mystery along with the kidnapping. It made for a nice round story that wasn't incredibly focused on how Britt handled her kidnapping, but rather how she managed to do that and discover who was the killer of so many teenage girls.

I will have to say though, I don't know how I feel about the ending. And since I don't won't to spoil it, I can't say more. It was a great read however, a nice quick standalone. 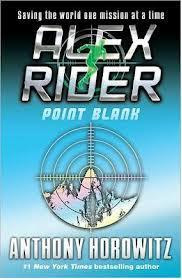 MI6 assigns Alex Rider, 14, undercover at an elite prep school for teen rebels after two fathers are assassinated. Principal Dr Grief and vicious cigar-smoking Mrs Stellenbosch are the only teachers. All the students act studious, perfect - and identical. When Alex finds the plot, the villains find him, and the mountain peak has only a black ski run escape.


This book was much like the first, but still was a fun read. I don't know, maybe I'm in the mood for strict adventure no matter how cliché it gets. This series is simple and fantastic. Definitely one I would have my younger brother read and one I would have middle graders read. It's easy and fast and the plot never slows, only picks up speed and gets faster.

Alex once again is forced to do MI6's bidding. The only saving grace for me not hating MI6 in this book is Mrs. Jones. She and Alan Blunt are two opposites. Jones actually cares about Alex, Blunt just wants the usefulness of a kid spy. I very much dislike him.

Still, I am coming to like Alex more and more. He's kind of secretly spunky. He basically does what he wants and finds a way to get away with it. But he doesn't do anything specifically bad, but he brings justice in places others can't. Like lifting a boat with a crane. All 14-year-olds do that, right?

I will admit, that even though this story was cliché too, there was a nice twist at the end I wasn't expecting. Well done. Now I'm exceedingly curious to read the third.