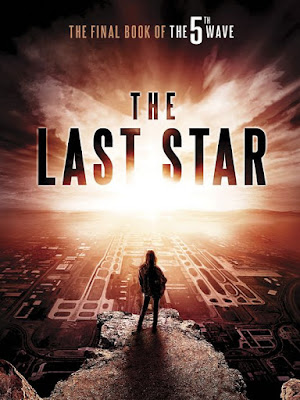 But beneath these riddles lies one truth: Cassie has been betrayed. So has Ringer. Zombie. Nugget. And all 7.5 billion people who used to live on our planet. Betrayed first by the Others, and now by ourselves.

But...once again... I enjoyed the story, just not the way it was written. A) there was a ridiculous amount of language, and B) like before, it's written in a way where you are confused if certain things happened or not. Important things, so your left really confused and not in a good way.

However, I will say it was a good book.

I just didn't care what really happened to the majority of the characters. Cassie is still an idiot. Evan is still awesome and the only one who is doing the right thing. Ben is still pretty good. Ringer is just "woe is me and all my hidden pain." Granted, she's been through a lot, but...I don't like her obviously.

You definitely have to really be into this series. I honestly think the first movie was better than the first book and if the producers keep it up, so will the second and third movies.

The ending wasn't even that satisfying. Or the way they got to that point. Just...meh. 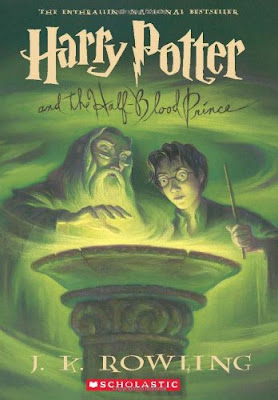 It is the middle of the summer, but there is an unseasonal mist pressing against the windowpanes. Harry Potter is waiting nervously in his bedroom at the Dursleys' house in Privet Drive for a visit from Professor Dumbledore himself. One of the last times he saw the Headmaster was in a fierce one-to-one duel with Lord Voldemort, and Harry can't quite believe that Professor Dumbledore will actually appear at the Dursleys' of all places. Why is the Professor coming to visit him now? What is it that cannot wait until Harry returns to Hogwarts in a few weeks' time? Harry's sixth year at Hogwarts has already got off to an unusual start, as the worlds of Muggle and magic start to intertwine...

J.K. Rowling charts Harry Potter's latest adventures in his sixth year at Hogwarts with consummate skill and in breathtaking fashion.


Once again. Harry Potter is life.

I remember reading this book for the first time and just...was aghast at the ending. I was in denial until the movie and the seventh book came out.

But, I moved forward.

This book once again shows the strength between Harry, Hermione, and Ron's friendship. We see the young side of Voldemort and how he came to be the murder he is.

This book brings in a lot of the past with the present. I love how we see more of the behind the scenes of Voldemort and why he never dies. It's a terrifying thought really, to tear one's soul into pieces to stay alive...

One thing that made me really sad in this book is that Dumbledore's Army only consisted of Neville and Luna. Those two fit in so well with there, and they made good friends there. I felt for them as they struggled this year without the DA meetings.

Although, this book showed how much Harry and his gang are still in the dark about things. Dumbledore was only able to brush the surface of everything going on. It's a good thing Hermione was there to help them figure the majority of it out. 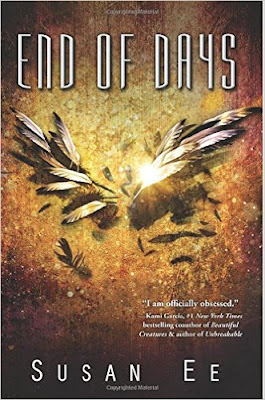 End of Days is the explosive conclusion to Susan Ee’s bestselling Penryn & the End of Days trilogy. After a daring escape from the angels, Penryn and Raffe are on the run. They’re both desperate to find a doctor who can reverse the twisted changes inflicted by the angels on Raffe and Penryn’s sister. As they set off in search of answers, a startling revelation about Raffe’s past unleashes dark forces that threaten them all.

When the angels release an apocalyptic nightmare onto humans, both sides are set on a path toward war. As unlikely alliances form and strategies shift, who will emerge victorious? Forced to pick sides in the fight for control of the earthly realm, Raffe and Penryn must choose: Their own kind, or each other?


*There are spoilers here if you haven't read the previous books*

This was perhaps the best ending to a trilogy I have read in a VERY long time.

Plus, we get to see more of Raffe's past and it just made my heart hurt. Yet, it was also so happy and good. Man. Ee knows how to pull your heart strings.

We also have to ache as we see Penryn's little sister, Paige, go through all the horrible surgeries and deformities the angel's did to her. That poor little girl had to survive more than anyone else. She is by far the bravest, especially as she leads those nasty monster angel-scopions.

Overall, the angels are getting ready to start Armageddon. Things are on fire and people are wondering if they are going to live another day. The intensity of the situation kept me flipping pages like I was in the angel Apocalypse and finishing this book would save my life.

Penryn has rounded all the humans (the twins are my favorite, despite how crude they can be), and Raffe is still her angel confidant. And well, they finally have become a little more than just friends. Finally, Raffe realizes how in love with Penryn he is. Which was about freaking time.

In this last book Penryn and Raffe have proved themselves to be top favorite protagonists of mine.

Needless to say, I couldn't put this series down. I owned the first two books and didn't have the this book. So, of course, I immediately bought it. I needed it. And I am so happy I read this series. This is one that will stick with me forever.

In this sequel to the bestselling fantasy thriller, Angelfall, the survivors of the angel apocalypse begin to scrape back together what's left of the modern world.

When a group of people capture Penryn's sister Paige, thinking she's a monster, the situation ends in a massacre. Paige disappears. Humans are terrified. Mom is heartbroken.

Penryn drives through the streets of San Francisco looking for Paige. Why are the streets so empty? Where is everybody? Her search leads her into the heart of the angels' secret plans where she catches a glimpse of their motivations, and learns the horrifying extent to which the angels are willing to go.

Meanwhile, Raffe hunts for his wings. Without them, he can't rejoin the angels, can't take his rightful place as one of their leaders. When faced with recapturing his wings or helping Penryn survive, which will he choose?

Another beautiful book by Susan Ee.

Man, I fell even more in love with this series! Which is awesome, because there was no second book slump!

This book starts right off where the first one ended. Raffe is gone, hunting for his wings, and Penryn is back with the military group she is sort of friends with and her mother.

One thing I hated (more of a personal thing, and something that went perfectly with the story) was that Raffe didn't come back until just after half the book was over. I love him, so it was hard to read the story without him. But, Penryn was able to figure out a few things for herself and develop as a character. So, it wasn't a real reason to hate, but I just really wanted them to finally admit they liked each other.

I was just so happy that this wasn't an instalove but a well developed relationship.

These books are also action packed. Penryn does not mess around, especially as she wields that angel sword. Her mother is a crazy person and is perhaps even more scary than the angels.

And Paige. My heart hurts when I think of Paige, but man, this series is so good.