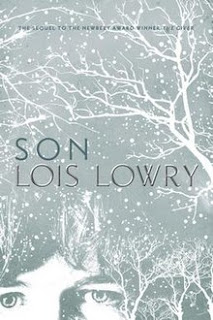 They called her Water Claire. When she washed up on their shore, no one knew that she came from a society where emotions and colors didn’t exist. That she had become a Vessel at age thirteen. That she had carried a Product at age fourteen. That it had been stolen from her body. Claire had a son. But what became of him she never knew. What was his name? Was he even alive? She was supposed to forget him, but that was impossible. Now Claire will stop at nothing to find her child, even if it means making an unimaginable sacrifice.

Son thrusts readers once again into the chilling world of the Newbery Medal winning book, The Giver, as well as Gathering Blue and Messenger where a new hero emerges. In this thrilling series finale, the startling and long-awaited conclusion to Lois Lowry’s epic tale culminates in a final clash between good and evil.

This series is so beautiful. I'm sad I never delved beyond the first book until last year.

Son unites all the previous books together: so if you haven't read this book there will be spoilers.

Claire, a young woman turned ancient, comes to the town where Jonas and Gabe have been living since their escape. But it's not quite that easy. She has to go through hell and back again to get there. She meets a monster who follows her to her son...but she's so old there's no way her precious Gabe would believe she was his mother...

The world beyond where Jonas grew up is incredible. Jonas's ability as The Giver is so much more than we ever thought. He is fascinating. As is Gabe.

Who knew the little baby Gabe was so much more powerful than we thought. A defiant teenager, sure, but strong--the way Jonas raised him.

Son brings our characters together in a whirlwind story where we learn vanity is not worth the price of our children.

Lowry knows how to write books that bring wonder into the reader's lives and teaches us life long lessons we should all uphold.

What I love most, is how she teaches us to be brave and to be kind.

This is a series I will definitely read again.

Posted by Unknown at 5:54 PM No comments: