Crown of Midnight: A Review 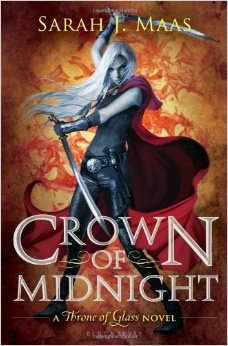 "A line that should never be crossed is about to be breached.
It puts this entire castle in jeopardy—and the life of your friend."
From the throne of glass rules a king with a fist of iron and a soul as black as pitch. Assassin Celaena Sardothien won a brutal contest to become his Champion. Yet Celaena is far from loyal to the crown. She hides her secret vigilantly; she knows that the man she serves is bent on evil.
Keeping up the deadly charade becomes increasingly difficult when Celaena realizes she is not the only one seeking justice. As she tries to untangle the mysteries buried deep within the glass castle, her closest relationships suffer. It seems no one is above questioning her allegiances—not the Crown Prince Dorian; not Chaol, the Captain of the Guard; not even her best friend, Nehemia, a foreign princess with a rebel heart.
Then one terrible night, the secrets they have all been keeping lead to an unspeakable tragedy. As Celaena's world shatters, she will be forced to give up the very thing most precious to her and decide once and for all where her true loyalties lie...and whom she is ultimately willing to fight for.

Let me begin by saying that this series is SO FLIPPING GOOD!!!!


I love the world building in this series and how I can picture everything that is happening with perfectly clarity in my mind. Amazing.

This particular book had a slow beginning, but now that I look back on it, it was steadily building up for the crash landing ending. Seriously, there’s all this up build and then suddenly so much happens that I’m frantically waiting to pick up the next book.

In this installment, Celaena is trying to discover the dark secrets of the Glass Castle and its King. She learns some startling things that change the whole course of what she is meant to do.

There are so many things that happen in this book, I don’t know how to write a review without spoiling anything… So I’ll focus on the characters.

I came to like Dorian a lot more. Not that I didn’t in the first book, but I feel like I saw more of him in this book. He has far more honor than his father and I believe he is smarter, even though he lacks his father’s cunningness. It makes me smile that he loves books so much; it is one reason why I can connect with him. He is handsome and strong, even though he isn’t built to be a fighter. Which, I don’t mind. It is nice to have someone who relies on his book-smarts rather than brute strength as heir to the throne. I don’t believe this is a weakness of his, I believe it is a strength, especially considering who his father is.

Chaol… I really do like him, a lot. There were times where he annoyed me a bit in this book, but I still like him. Finally, finally, his eyes are opened to the evilness of the king and he begins to work more on finding out the truth rather than blindly following. I like how he is loyal to those he cares about, even when it complicates things. I believe his heart is in the right place, and in the end, I know he will make the right choices.

Celaena was a little scary is this book. I won’t say why, because it will spoil things. Also, I understand why she was the way she was. Her world, which was already surrounded by grief, was amplified in this book. What I like about her, is that even after her dark moments, we are shown that she still has a heart and feels guilty about certain things—that she isn’t a monster. She shows us that even when people go into the dark places, it’s that they can still come back into the light.

Overall, this book was full of foreshadowing and hints of what is to come. These little points make me super excited for the next book.

As for content, there’s a little more language in this book than the previous ones, and a fade to black sex scene. Other than that, there isn’t much sexual innuendo.