The Blood of Olympus: A Review 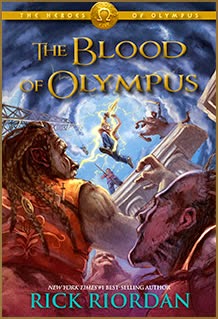 Though the Greek and Roman crewmembers of the Argo II have made progress in their many quests, they still seem no closer to defeating the earth mother, Gaea. Her giants have risen—all of them—and they're stronger than ever. They must be stopped before the Feast of Spes, when Gaea plans to have two demigods sacrificed in Athens. She needs their blood—the blood of Olympus—in order to wake.

The demigods are having more frequent visions of a terrible battle at Camp Half-Blood. The Roman legion from Camp Jupiter, led by Octavian, is almost within striking distance. Though it is tempting to take the Athena Parthenos to Athens to use as a secret weapon, the friends know that the huge statue belongs back on Long Island, where it "might" be able to stop a war between the two camps.

The Athena Parthenos will go west; the Argo II will go east. The gods, still suffering from multiple personality disorder, are useless. How can a handful of young demigods hope to persevere against Gaea's army of powerful giants? As dangerous as it is to head to Athens, they have no other option. They have sacrificed too much already. And if Gaea wakes, it is game over.

I have kept up with this series since my eighth grade year. Now I am a freshman in college and have just finished this fantastic final book. I can’t believe it’s over! It’s been so long since Percy Jackson first came out, and it kept on getting better.

It took me a while to finish this book because the college life is demanding, but I enjoyed it every time I opened up and wanted nothing more than to keep on reading it. So last week I finally finished it! And I am so happy I did.

This book is filled with action, adventure, and the amazing humor Riordian has. I laughed my way through as Leo provided jokes that helped distract from the serious and disastrous circumstances that surrounded the seven demigods. It is always good to have one person who tries his or her best to cheer up the group when everything was falling apart.

A huge thing I love about this series is how the demigods came to unite with each other. Obviously they have problems here and there, but they accept each other’s differences and learn to work together for the bigger cause.

I came to care about all the new demigods and my love for Percy and the gang from the first five books grew even more.

Hazel is strong, funny, and I love how she sometimes compares today’s world to her previous life. I like how she doesn’t shrink from responsibility even despite her age. She is a peacemaker among the group and even though she is a daughter of Pluto, she does well at looking on the bright side of things.

Frank. He makes me laugh, if just for his awkwardness. He is like a giant teddy bear that will tear anyone down if you mess with his friends. Frank is fiercely loyal and is probably the character who grew the most. He went from being a bit of a coward, to being a fearless leader of armies. I loved seeing that growth.

Obviously Leo is the funny trickster. Though he can get annoying at times, he does his best to keep everyone’s spirits up and understands the difference between stupid and smart decisions. Though, he is really good at making smartly stupid decisions… A bit of an oxymoron, but if you read these books, I’m sure you’ll understand.

All right, who else is new in this series…

Ah yes, Jason. I really like him. Although he began as the typical blonde jock, he grew into a strong man with honor and strength. He learned to not take crap from anyone and to stand up for what’s right even with the Greek/Roman Gods staring him down. I love how he always has his friends’ backs; if anyone needs help, Jason is there for them.

Piper is cool too. I love how even though she is a daughter of Aphrodite, she isn’t like the other girls and boys in the Aphrodite cabin back in Camp Half-Blood. She is humble and a quiet kind of strong. In the beginning she doesn’t believe she can do much, but through this series we see her grow stronger to the point where you would want to be on her good side.

Reyna is pretty cool too. I like how she unites with the Greeks and casts aside the prejudice between the two camps. I would like to say more, but I will not spoil it for you.

I highly recommend this series. It is definitely worth it. It is clean, funny, and full of adventure. If I had the choice, I wouldn’t have put this book down; it was SO good and had such a beautiful ending. It was perfect. And ending can make or break certain series, but this ending definitely made the series! Once again, it was perfect.