House of Many Ways (Howl's Moving Castle #3): A Review 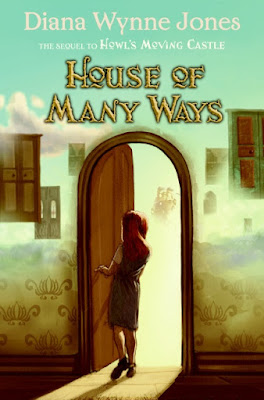 When Charmain is sent to look after Great-Uncle William's house while he is away being cured by the elves, she is unprepared for the house itself. But she is prepared for reading--and that makes her indispensable to the Wizard Howl, in this sequel to Howl's Moving Castle.

Charmain Baker is the main character of this sequel for Howl's Moving Castle. She is a stubborn, hot-headed, red-head, who has grown up in ignorance about the world, because her parents were terrified that she would do something improper.

Yet, we are similar in heart by the fact that she LOVES and LIVES books. Her passion for reading is what really connected me with her. Whenever she got really stressed, she would go and take a break to read her books.

When her aunt bring her over to her Great-Uncle William's house to watch over his magic house while he is away, being healed by the Elves. Here, Charmain begins to learn the way of magic and patience. While she is finally getting used to William's house, which is truly a house of many ways, she can reach anywhere whenever she wants too, but there is a great risk of getting lost. So as she discovers her ground, an apprentice shows up. Peter.

Peter is smart, while not very cautious. He doesn't know his left and rights, which makes him get lost quote easily in William's house. And he never gets his spells right. However, once he knows his way around, he gets very sneaky and clever.

Peter and Charmain do NOT get along. Their banter is fun to see, and it shows great growth in Charmian, who has never really had to deal with others her age before.

Eventually, Charmain gets a job working for the king and Princess Hilda, sorting out letters and books in the royal library. Here, she discovers mysteries about the kingdom, and it's missing gold.

There's not much I can say without spoiling the book so... As the story progresses, we get to see Sophie and Howl again. Man, it was so much fun to see them and their future together. Howl was as dramatic as ever and Sophie was as beautiful and demanding as ever. Calcifer was just fabulous. Got to love that fire demon.

Overall, this was a fun book diving further into the world Diana Wynne Jones has created. It was great to meet new characters and revisit old ones, while learning even more about this magical world. This world is very intricate, but Jones paints it wonderfully, I honestly wish I could explore every crevice of it!

As with Howl's Moving Castle, the beginning was pretty slow, but once the action got rolling it didn't stop. I'm glad I was able to enjoy this continuing story of magic and mystery.