A Heart Revealed: A Review 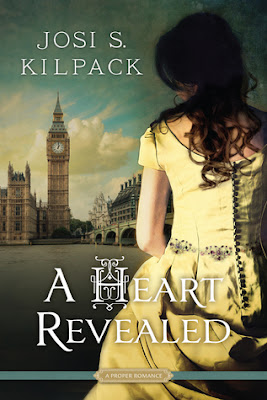 Amber Marie Sterlington, the Rage of the Season in Regency-era London, has her pick of men, and she knows what she wants most in a husband: a title and a fortune. Why would she ever marry for something as fickle as love? And why would she ever look twice at Thomas Richards, a third son of a country lord?

But when Amber’s social standing is threatened, the character of her future husband becomes far more important than his position. After a public humiliation, she finds herself exiled to Yorkshire. Alone except for her maid, Amber is faced with a future she never expected in a circumstance far below what she has known all her life. Humbled and lonely, Amber begins to wonder if isolation is for the best. Who could ever love her now?

I've been keeping up with Shadow Mountain's Proper Romance collection and this recent addition was quite interesting.

Honestly, this was on of the oddest love stories I have ever read ever. Really, it wasn't much of a romance. It was about a 19th century, high society, rich girl (Amber Sterlington) coming to realize what a terrible person she is.

It's also about Amber's HUGE change of heart. She went from being a giant wench to a girl with a heart. Thanks to her faithful, awesome lady's maid, Suzanne, who stuck with Amber despite her terrible meanness, Amber grew up. She was able to realize what was really important in life. It wasn't all the fancy clothes or securing yourself in a marriage based in money, not love.

Although I really did not like Amber in the beginning, especially with the way she treated dear Thomas, once she was significantly humbled by extreme circumstances, I started liking her. I don't like mean and manipulative girls and that's what Amber was.

After being humiliated, she it sent to Steep Cottage. Here she learned how to take care of herself and learn to appreciate what she had previously taken for granted. And Mr. Richards (Thomas) came over quite often even though Amber was disguising herself as an older widow. He definitely knew the truth, but he never let on and tried courting her now that she wasn't a beast. It was quite odd, really. Their courting...

Still, all in all it was a really good story about learning to love yourself and find genuine people who will live you for who you are and not your money. The lessons Amber learned were very realistic and beautiful, if not touched with a little pain. I liked this book for that, because it really wasn't a romance. I do recommend it, however. It really shows the cruelty of the ton and how much society really hurt people. The history was amazing and that's why I really liked this book. Oh, and Thomas, of course.