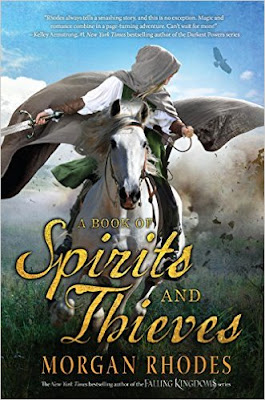 Worlds collide in this suspenseful, page-turning Falling Kingdoms spin-off series, which explores a whole new side of Mytica—and an even darker version of its magic.
Crystal Hatcher, Modern-day Toronto: It’s a normal afternoon in her mother’s antique bookshop when Crys witnesses the unthinkable: her little sister Becca collapses into a coma after becoming mesmerized by a mysterious book written in an unrecognizable language.

Maddox Corso, Ancient Mytica: Maddox Corso doesn’t think much of it when he spots an unfamiliar girl in his small village. Until, that is, he realizes that she is a spirit, and he is the only one who can see or hear her. Her name is Becca Hatcher, and she needs Maddox to help get her home.

Farrell Grayson, Modern-day Toronto: Rich and aimless Farrell Grayson is thrilled when the mysterious leader of the ultra-secret Hawkspear Society invites him into the fold. But when he learns exactly what he has to do to prove himself, Farrell starts to question everything he thought he knew about family, loyalty, and himself….

Fate has brought these young people together, but ancient magic threatens to rip them apart.
My Review:

In this book, we follow Crystal Hatcher, Maddox Corso, and Farrell Grayson.

And man, did these characters produce some plot twists and spins. This series occurs in modern day and ancient Mytica. I do suggest reading this in the order of publication with all the Falling Kingdoms and Spirit & Thieves (like with the Mortal Instruments and Infernal Devices series). You don't have too, but it makes for more surprises and makes more sense because you already have some background to Ancient Mytica.

Anyway, in Falling Kingdoms, I never knew who that good guy was. No was was explicitly good, so I was always at conflict as to who I should be rooting for (which made the series even more fun). However, I think for this side series, Rhodes invented genuinely good people. At least, I'm hoping she did. Crystal, her sister Becca, and Maddox seem like they will be fighting for the good side. I'm really hoping so, that would make this series distinct from Falling Kingdoms and give me hope that someone does the right thing for once.

Farrell however, I super hate that guy. I liked him okay in the beginning, but then he became insane. Granted, it wasn't all his fault...still, he had his choices and the signs were all around him. Once he joins the deeper ranks of the Hawkspear Society, he grows worse and worse. So much so that he reminds me of a few characters from Falling Kingdoms and made me shiver a bit.

The Hawkspear Society had many dark twists and turns that set everything running. This is the source of all the problems and I am scared yet also extremely intrigued to see what Rhodes has planned for this society. For the leader is from Mytica. How he got to the modern world is still a mystery. I just know he's insane and very, very evil.

I don't really know how to dive into the story without giving too much away, because there is just so much awesome in this book (no kidding, I couldn't put this down). I love the way Rhodes writes. It's so realistic and I'm walking right along with her characters, even the scary ones. If you fell in love with the Falling Kingdoms like I did, you will for sure love this side series. As far as I can see, there will be three in the Spirits and Thieves and six in the Falling Kingdoms.

If you love books filled with adventure, intrigue, and only a hint of romance, I really suggest these series. I am so happy to discover that this side series is going to be fantastic.