Of Triton (The Syrena Legacy Book 2): My Review 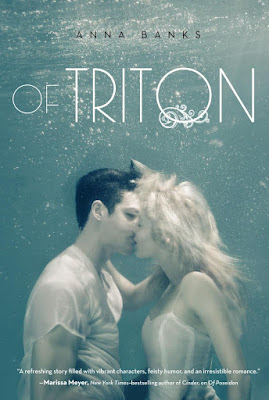 Emma has just learned that her mother is a long-lost Poseidon princess, and now struggles with an identity crisis: As a Half-Breed, she’s a freak in the human world and an abomination in the Syrena realm below. Syrena law states that all Half-Breeds should be put to death.

As if that’s not bad enough, her mother’s reappearance among the Syrena turns the two kingdoms—Poseidon and Triton—against one another. Which leaves Emma with a decision to make: Should she comply with Galen’s request to keep herself safe and just hope for the best? Or should she risk it all and reveal herself—and her Gift—to save a people she’s never known?

Once again, Anna Banks infuses Emma and Galen's points of view with humor, intrigue, and waves of romance.

First things first, if you haven't read the first book, there will be spoilers.

Now, Emma is extremely ticked off during most of this book and frankly, if I was her, I would be too. Why? Because her mother is the run-away Poseidon princess who is in love with Galen's older brother Grom.

Gross, right? This super weirded me out and still weirds me out, but I ignore it so I can enjoy the story. It's not every day that a mom and her daughter are in love with brothers.... weird.

So, of course when Emma's mom, Nalia, returns to the Syrena, they have a holy freak out and Jagen, an incredibly annoying evil guy decides to make everyone question her identity. So, the book is about the tribunal deciding whether or not Nalia is who she says she is.

And poor Emma. Man. Her life sucked in this book. She had to juggle school, Galen, Rayna's crap, and extreme boredom as she was forced to stay on land for her safety. Emma is a Half-Breed and therefore illegal in Syrena eyes, and with Nalia on trial, it would sign Emma's death sentence if she went into the water.

Galen was even more swoon worthy and likeable. I love how he not only fights for the Syrena, but for Emma too. He is willing to do whatever it takes to have Emma as well as staying true to those he cares about. (Of course, there are some times when he doubts...but I let you read the book).

There was one plot twist in this book I did NOT see coming and made me VERY angry. And yet, it all ended up perfectly and I congratulated Banks on her genius. It was really a fantastic plot twist.

I can't really say much more without giving anything away. Just know that this was a great book and if you like mermaids, you should read it.