Eleanor and the Iron King: A Review 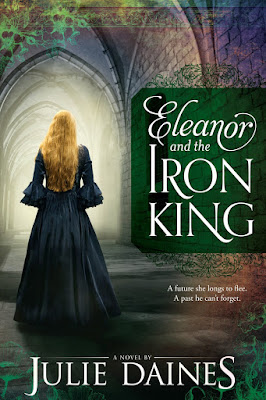 Eleanor de Lacy is forced into an arranged marriage with her father’s greatest enemy, Brac Goch, the Welsh king. All Eleanor knows of Brac is that he is a ruthless, war hungry man.

Eleanor arrives at the Welsh castle of Bryn Du already expecting the worst. When the ghost of Brac Goch’s first wife appears and warns her that the Welsh king is not to be trusted, all of Eleanor’s fears are confirmed.

As the countdown to her wedding day approaches, Eleanor must figure out who is lying, who is telling the truth, who is loyal, and who is the traitor--and most of all, if she can love an enemy king.
My review:

Saw this book at Seagull Book, read the back, and immediately decided I would love this book.

Of course, the book didn't end up to be what I thought it would be, but it was MUCH better. :)

Eleanor is English royalty and has been pledged to the Welsh king, Brac Goch. She is beyond terrified to meet this apparently evil, scary king. Yet, she doesn't want to stay with her abusive father. There is one person alive she still loves and that is her friend Gilbert.

It was really sad to see her say goodbye to Gilbert and start her new life living at the Welsh castle Bryn Du. At this point, Brac and Eleanor are only engaged, so Eleanor finds excuses to stay as far away from him as possible, hoping that he will end their engagement.

During her exploration of the Welsh country, a ghost appears to her, all creepy like and warns her to stay away from Brac. So of course this scares her half to death, but what I find funny is that every time the ghost leaves her a message, she does directly to Brac, wakes him up and accuses him of something. While reading the story is was very intense; looking back on it, it's kind of funny and also shows that Eleanor isn't going to blindly trust something that's dead.

Eleanor was a smart girl. There are a few mysteries in this book that I won't reveal, but she finds them out pretty soon after I did. I like that Eleanor was intelligent. Her skill with healing herbs was amazing too, of course, she gets accused for being a witch. Still, when Brac sees that she is genuine, he returns them to her.

Brac Goch is not who I was thinking he would be. He was a far better man than what I was expecting. The sacrifices he makes, the love he hold for his country is amazing. I love how he made sure to discover the truth when there was any doubt and remedy and apologize if he did something wrong (like returning Eleanor's herbs). I expected him to be emotionless. Instead, he laughs often and tries to find the good in everything.

After all the lies and mysteries have been solved, Eleanor realizes just how good of a man Brac is. And oh, the love story is oh so sweet. It's been a long time since I couldn't fall asleep because I had to finish a book. It was beautiful.