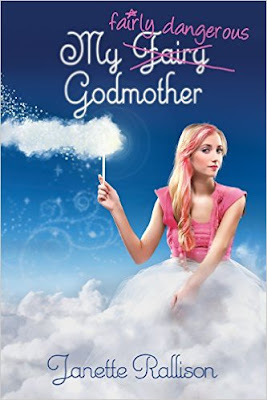 Some people bomb auditions. Sadie Ramirez throws up during her tryouts on TV show America's Top Talent. Her performance is so bad, it earns her a fairy godmother through the Magical Alliance's Pitiful Damsel Outreach Program. Enter Chrysanthemum Everstar: a gum-chewing, cell phone-carrying, high heel wearing fairy godmother in training. She misinterprets Sadie's wishes and sends her back in time to be a part of The Little Mermaid story and then makes her one of the twelve dancing princesses. Wishes are permanent, and if Sadie wants to get back to her home, she'll have to strike a magical bargain--one that involves stealing a goblet from a powerful fairy queen.


This is another great installment in the My Fair Godmother series. In this version, we dive into the little mermaid and the twelve dancing princesses with Sadie, Jason, and Donovan.

And oh man, was this one a good one.

Sadie is basically an unfortunate soul who thinks she knows what she wants to do with her life, but then throws up on stage in America's Top Talent. Yeah, super embarrassing, and basically marks the end of a teenage girl's life right?

Chrissy the fair godmother does. Or at least, it seems like she's trying to.

As we have seen in the previous two books, Chrissy sucks at being a fairy godmother. Hence why she is still only a "fair" godmother. Sadie is sent back in time with famous pop star Jason Prescott into the little mermaid, where disaster strikes almost immediately. The little mermaid's sisters all think she's absolutely crazy, and Jason is the biggest punk in the world.

Needless to say, Sadie makes her last wish and is sent into the world of the twelve dancing princesses. Here, she meets another guy from her time, juvenile delinquent Donovan. Both of their fairy godmothers have pitted them to steal a goblet from the Unseelie Fairy Queen. A dangerous task at hand that could end in death.

So what are two teenagers to do but gain up against the fairy's that ruined their lives and the one they're trying to steal from?

Donovan and Sadie are awesome together. He teaches her professional magic tricks to help her steal the goblet, expressing confidence and patience with her clumsiness. They work well together, and are just so dang cute. Basically, they are perfect for each other.

The adventure, full of danger and fun, is a fantastic read. I loved seeing Sadie's and Donovan's relationship and how they not-so-subtly made fun of Jason the whole time without him really understanding what was going on.

This book is full of laughs, along with a great connection with the characters. If you want a light-hearted fantasy, this is the book for you!