Of Neptune (The Syrena Legacy Book 3): A Review 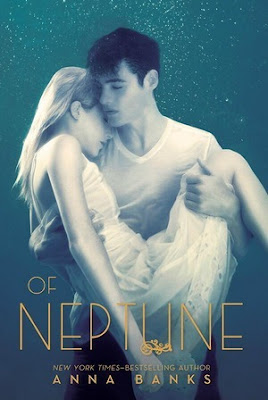 Emma, who is half human and half Syrena, and her Syrena love, Galen, need time together. Alone. Away from the kingdoms of Poseidon and Triton. Emma’s grandfather, the Poseidon king, suggests the two visit a small town called Neptune.

Neptune is home to both Syrena and Half-Breeds alike. But Emma and Galen didn’t sign up to be peacemakers between the ocean-living Syrena and the land-dwelling, freshwater counterparts. They didn’t bargain for meeting a charming Half-Breed named Reed, who can barely disguise his feelings for Emma. And they especially didn’t expect to find themselves in the middle of a power struggle that threatens not only their love, but their ocean kingdoms.

In this stunning conclusion to her bestselling Syrena Legacy, Anna Banks thrills fans with more action and romance than ever.

The final chapter with Galen and Emma. I do have to say, that this book did have more action than the first two, but there was also an introduction of a character I didn't particularly appreciate.

The book begins with Emma's grandfather, the Poseidon king telling her of a city called Neptune. It is filled with Half-Breeds like Emma. Only, they're not only Half-Breeds. Many of them have the Gift of Poseidon also like Emma.

Galen doesn't appreciate being hauled to a city of Half-Breeds. He doesn't really know how to take it because he knows Emma loves it, but this is also against Syrena law. He and Emma have a fight about it, then Galen leaves to cool off, only to get himself kidnapped.

So of course, Emma has no idea why Galen has suddenly disappeared and the "awesome" Half-Breed whom I didn't like at all simply because he caused unnecessary problems, started hitting really hard on Emma. Here's the thing. I don't like love triangles. Never have. So to introduce one in the last book when Emma and Galen already have established their relationship bothered me. The guy's name was Reed.

Alone, Reed was a great guy. Good looking and very flirtatious, but also caring and courageous. A nice, solid character. He just shouldn't have been a plot twist.

I did appreciate that Emma wasn't a wishy-washy idiot who suddenly threw her feelings for Galen away. I liked that she stayed strong and really discovered for herself that Galen was the one she wanted. That's the only reason why this book didn't Extremely bother me. Don't introduce a possible love interest in the last book. Just...no.

Anyway, there is a lot of mystery going about the town of Neptune. A lot of secrets hidden by bitter hearts. I loved the adventure and intrigue in this story. It was a pleasant surprise since most of this series focuses on Galen and Emma's romance.

The end was a tiny  bit  of a let down (really, it wasn't bad, just a personal preference). It was like, surprise! Everything is fixed now...I mean, I can see why Banks did it, because explaining all the stuff in between might have been tedious...I just would have liked more of an explanation on how the ocean Syrena handled the Neptune Syrena.

Ah well. I did thoroughly enjoy this series, however. If you like mermaid stories, this is a good one to look into.