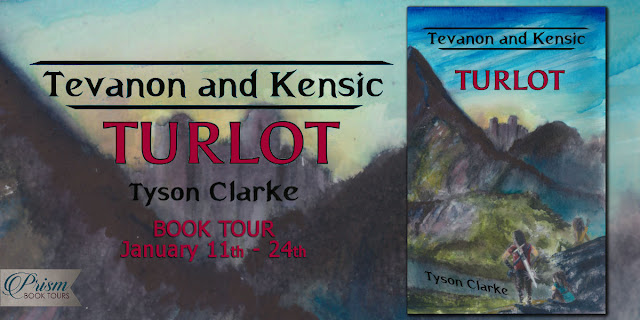 Did you enjoy visiting this fantastical land as bloggers shared reviews and excerpts? If you missed any of the stops, go back and check them out now...


1. What is your motivation behind Tevanon and Kensic: Turlot? Why did you want to write it?

I wrote a short story about these characters when I was in college, back in 1995, and then converted it to a short (film) screenplay. Tevanon and Kensic were adults in those versions, but I always thought it would make a cool young adult adventure if the brothers were younger. And so, nearly twenty years later I rewrote it into a novel in that vision. I may be somewhat bias, but I think I was right; it does make for a cool young adult adventure!


Tevanon barged into the hut, his long brown hair swaying over his burgundy tunic that hung below the waist of his goat hide pants. He was big for thirteen, already taller than most grown men and easily as strong. Tevanon was molded after his father who was a huge man with great physical strength. “Uncle Yelob!” he shouted. “Can we practice sword fighting?”


Many things caused Tevanon’s temper to flare. Cheating was one of those things, and so was a slandering comment about one of his family members. Ecrom knew this and did it on purpose. He was rather devious and malicious when it came to getting Tevanon into trouble, and mostly because he was jealous of the younger boy’s size and abilities. One of those abilities was hand-to-hand combat; Tevanon grabbed Ecrom and hurled him haphazardly. Ecrom crashed down at the feet of his father and looked up. “Tevanon has lost his temper again, father!”


Avor, Wix and Hedik surveyed the dead brigands in hopes of finding one of them alive so as they could question him. As they meandered through the scattered bodies, they found men from every nation, men of light skin and dark, short of stature and tall, and the weapons they carried were equally assorted. The question, of course, was what brought together this reckless collection of thugs and criminals? What was their purpose?


"The characters are easy to visualize. The various scenes are portrayed well. The Book Cover is attractive, depicting the crux of the story, and the title fits very well."


Deep within the haunted caverns of Dezvil, well beyond the jurisdiction of men, there was said to be the sacred place of the sorcerers who ruled the land thousands of years ago. No living person dared journey to this place, not without the protection of a powerful spell cast by a powerful sorcerer. But all of the powerful sorcerers had vanished, either killed or too old to live, and not one of them had yet found the pathway back to the living. Or so was thought, until now.


"The exploit in this story is fun, as well as has many engaging and like-able characters. This story has a bit of violence, but is not overly graphic, but I would recommend it older teen readers."


"Being an adult who read it, I enjoyed it more than I thought I would and would recommend it! It would be a great book for young male readers and I think female readers can enjoy it as well!"


Tevanon drew his sword at the man’s first word. He could see the vague outline of a person sitting against one of the twisted trees. He didn’t appear threatening, but Tevanon was taught to error on the side of caution.


Tevanon shrugged as a woman darted out from the darkness. Her dress was torn and tattered, her hair unbound and tangled, and mud was splattered across her legs and bare feet. She met eyes with Tevanon. “Help me, please!” Her cry was desperate.


Both Tevanon and Kensic knew what that meant. It meant the members of the Elite Guard of Detoa had been hijacked and the jewel stolen. Disappointed by this unexpected news, the brothers found a nearby inn where they could stay for the night. The main entry led to a dimly lit common area with various tables set around a large circular hearth. It was a place for eating and drinking and being merry. On this afternoon, though, being merry was not part of anyone’s demeanor. 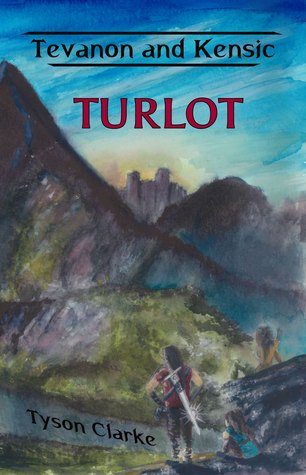 Upon the shores of the Laughley Sea, in the shadows of the jagged Northland Mountains and not so far south as the blistering Aronee Desert, there exists a land of lush forests and golden plains. This land is known as Lynsid, a once great nation that has suffered through more than a decade of demoralizing wars. The brothers Tevanon and Kensic were born to Lynsid like their parents and grandparents before them. They know no other life and have never been outside the borders of their homeland. Lynsid, however, is on the verge of collapse and rumors of a Vlagen invasion spur a mass migration. At first, the brothers have no intention of leaving their birthplace, but soon enough they have no choice and find themselves on the trail to a land called Turlot where their Great Uncle Welksley resides.

At just thirteen-years-old, Tevanon is already highly skilled in swordsmanship, and his nine-year-old brother Kensic is mentally gifted. These attributes are useful, but the journey to Turlot will test not only their brawn and brains, but also their faith and tactfulness. The brothers learn quickly the world is filled with endless adversity. Treachery is in plain sight, evil sorcery is silently stirring, and an immortal army is lying in wait! If the brothers wish to survive, they must be vigilant, they must be brave, and they must believe in themselves.

Tyson Clarke attended San Jose State University where he studied creative writing and film production. Post graduation, he found success as a technical writer then pursued other interests before rediscovering his passion for writing stories with encouragement from his wife and biggest fan.