The One: A Review 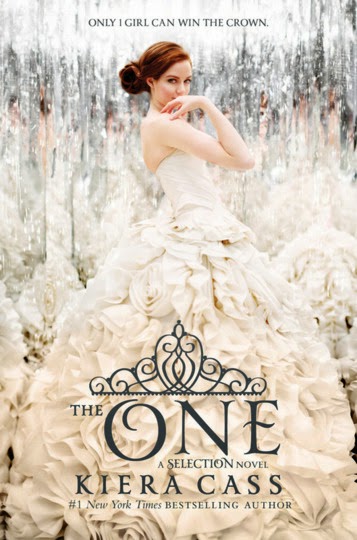 
The highly anticipated conclusion to Kiera Cass's #1 New York Timesbestselling Selection series, The One will captivate readers who love dystopian YA fiction and fairy tales. The One is the perfect finale for fans who have followed America's whirlwind romance since it began--and a swoon-worthy read for teens who have devoured Veronica Roth'sDivergent, Ally Condie's Matched, or Lauren Oliver's Delirium.

The Selection changed America Singer's life in ways she never could have imagined. Since she entered the competition to become the next princess of Illéa, America has struggled with her feelings for her first love, Aspen--and her growing attraction to Prince Maxon. Now she's made her choice . . . and she's prepared to fight for the future she wants.

Find out who America will choose in The One, the enchanting, beautifully romantic third book in the Selection series!

And it was awesome.

I have to admit though, there was one point in which I was going to throw it across the room, and I even skipped ahead (SOMETHING I NEVER DO) to see if America would end up with the right person.

Once I was satisfied, I went back and finished the book and was very surprised at how the ending came about. It was NOT what I was suspecting.

Throughout this series, I did not like America. Nope. I know, weird, right? To dislike the main character in a first person POV series, but still love the story. Well, that's what happened.

Until this book. Mind you, I still didn't like a lot of what she did. She should have told Maxon about her relationship with Aspen long before she did. I hated the way she clung to Aspen as a safety net. And then... then she pulled herself together and I actually began to like her.

Which kind of blew my mind.

I think the big turning point in which I began to connect with her was during the Convicting. I love the choice she made and the way she came about it. More importantly, I loved how strong she became. She finally stood up for what was right and denied the harsh, somewhat crazy demands of King Clarkson. Throughout everything, I think she will end up as a great queen--now that she's finally stepped up and stopped complaining and juggling between Aspen and Maxon.

And Maxon, I have loved him throughout this series, he's really the only reason (besdies the compelling story and it's idea) that made me keep reading. I hated him for a bit in this book.

Which kind of blew my mind.

Yet, after finishing the book (and loving him again) I know why he acted the way he acted. America was terrible to him, always playing his with his emotions, lying, and holding back. He had every right to be angry with her and do the things he did. America deserved it.

I love Maxon, he's kind and he will be a far better king than his father ever was. He's awesome. For the longest time I thought that America didn't deserve him, but I know that America is the only one who makes him happy. And Maxon deserves to be happy. And I wanted them to end up together, so it all worked out.

This series was so much fun to read. I really hated Aspen and now my hate for him is somewhat quelled. (His secret romance with Lucy was abrupt and sort of weird to me, I wasn't expecting that). I think my whole emotional attachment, most of them not a positive one, is why I loved reading this series so much. My heart pounded, I screamed, jumped out of my seat, cried, etc. Kass has a way of with words that bring out one's emotions. And the fact that I got so involved makes me want to congratulate her. I know I've had my qualms with this story and the characters, but I can honestly say that I love this series.

Everyone ends up happy, dang it! I freaking love happy endings!! And it feels like a long time since I've read one.