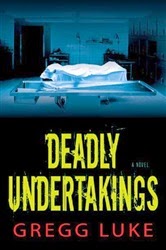 Being an assistant to the state midical examiner in Salt Lake City might sound like a dead-end job, but Rebekah Smith loves the mystery and challenge of determining the cause of death in the bodies delivered to their morgue. Tutored by her friend and boss, Dr. Sandeep Mahesh, she gains understanding not only for her job but also for how to mask her own troubled past.

While analyzing the corpse of a 100 year old woman, Rebekah discovers some disturbing elements: not only was the deceased woman a healthy centenarain, but she was also embalmed before anyone discovered she'd passed away. When two identical cases surface, Rebekah enlists the help of her boyfriend, special investigations officer, Josh Logan. Together they uncover shocking truths about the bizarre deaths, which eventually lead them to the nightmarish revelation they weren't prepared for. Yet, unknowingly, the more they reveal, the closer they come to being the killer's next guinea pigs.

I was quite excited to read this book. I had the opportunity to meet Gregg Luke at the American Night Writers Association (ANWA) Conference this last February. He gave an awesome lesson on writing suspense--and I saw evidence of it in his writing! That alone made my day.

I loved the fact that I felt like I was in a movie while reading this. Luke did a fabulous job of creating the world and describing it just enough to make my mind form solid pictures. When Rebekah Smith, one of the protagonists, was in the morgue working with the cadavers, I felt like I was watching Bones or NCIS with Ducky working on some poor victim.

One part in particular that I could picture vividly AND hear in my head was when Josh Logan was talking with his cop friend Nick. Luke wrote out Nick's accent beautifully, and even added the right gestures that I would have imagined myself, had he not enhanced the vision by adding those words in.

Oh, and the bad guy? Man. I thought it was awesome that I got to read from his point of view. It was creepy--but it was also meant to be. It makes me grateful for my safe home and my intuition to stay away from scary people. STRANGER DANGER is real....

I also enjoyed the medical and cop jargon that was all throughout the novel. I loved it because I am currently in an anatomy class, so I totally understood everything they were saying. Also, it made the book far more believable. Although most people might not understand, it shows the level of research Luke put into his book.

It is an LDS murder mystery published by Covenant, and I enjoyed how well Luke blended religion in with a real world situation. He made it believable while not being preachy. I am LDS myself, so I liked the fact that he wrote it that way.

This was a really slow start for me. It does start out immediately with the problem, but it took me a while to actually get into the book. It is out of my normal genre, but I was expecting more. The real suspense that I was looking for didn't come until the very end, which sort of disappointed me, but it was well written. Like I said before, I could picture everything clearly, and I tensed up at the right parts.