The Selection Stories: A Review 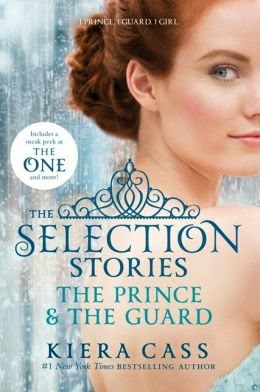 I have read The Selection and The Elite, and was super excited when I went to Barnes and Noble and discovered that The Prince and The Guard were in paperback. So of course I had to buy it!

Here's my review for The Prince:

This just made me love Prince Maxon even more. He's really the only character I like in this series and the only reason why I keep reading these books.

Seeing the beginning of The Selection from his point of view kind of made my heart hurt. Maxon is incredibly lonely and clueless when it comes to love. His father is a terrible person, and though he is somewhat close to his mother, the attachment doesn't seem strong.

Some people see him as dull, but I see him as someone who is forced to retreat inside himself or else face the beatings from his father.

All Maxon wants is to be loved.

We see the hope he has for The Selection, the first chance he has to find the woman of his dreams. Of course, he is nervous and has to take in account who will be the best for his country, but I can tell he is excited. Totally opposite of what America Singer thinks from her point of view in The Selection.

I was surprised that Maxon was looking forward to thirty-five girls coming to the palace, but then I realized just how much he needed friends, and someone to love. I always thought The Selection was a terrible process, but now that I've seen it from Maxon's point of view, and how it is sort of liberating for him, it makes me rethink my original thoughts.

Maxon is intelligent and observant. He is a gentleman, despite his circumstances. His best characteristic is that he wants to do what is right for the people around him and for his kingdom. He is good man. I believe that when he becomes king, he will do far better than his father and will bring his kingdom from the depression it is in, to it's once former glory.

In all honesty, I wish I could read more from his point of view. Prince Maxon is by far the best character in this book, the most genuine and lovable. I hope that he gets a happy ending.

Now my review for The Guard.

First things first. I never liked Aspen. In fact, I was enraged that he even showed up as a guard in The Selection. He made his end with America and then he came back and ruined everything.

I still don't like him, even after reading this novella, but I think I may understand him a bit more.

Aspen's motives are well enough. He does genuinely love America, he's a good man, and cares for his friends and family. But I still think he's an idiot.

He just watched Marlee and Woodwork get caned for their secret rendezvous, and then what does he do? Oh, he goes and does the same thing with America.

I mean, seriously? If he really loved her he wouldn't risk her getting whipped or tortured.

Also, he said something that really bothered me. Just because Maxon was vying for America's heart too, Aspen couldn't think one good thing about him. I've read enough love triangles and enough bad relationships to know there usually is one good thing even the worst of enemies can find about each other. I just thought it was shallow of Aspen to think that way.

All in all, I thought the story was great and Cass certainly has a talent for writing. I love this story, I do. I just don't like some characters. It is a four out of five for me.
Posted by Unknown at 5:00 AM