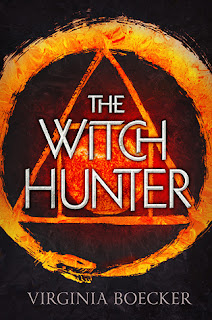 The magic and suspense of Graceling meet the political intrigue and unrest of Game of Thrones in this riveting fantasy debut.

Elizabeth Grey is one of the king's best witch hunters, devoted to rooting out witchcraft and doling out justice. But when she's accused of being a witch herself, Elizabeth is arrested and sentenced to burn at the stake.

Salvation comes from a man she thought was her enemy. Nicholas Perevil, the most powerful and dangerous wizard in the kingdom, offers her a deal: he will save her from execution if she can break the deadly curse that's been laid upon him.

But Nicholas and his followers know nothing of Elizabeth's witch hunting past--if they find out, the stake will be the least of her worries. And as she's thrust into the magical world of witches, ghosts, pirates, and one all-too-handsome healer, Elizabeth is forced to redefine her ideas of right and wrong, of friends and enemies, and of love and hate.

Virginia Boecker weaves a riveting tale of magic, betrayal, and sacrifice in this unforgettable fantasy debut.

I suppose, however, after reading so many books with a similar plot as this one, I got a little bored. If you haven't read as many fantasy books as I have, perhaps this one would be a good match for you.

Elizabeth is a well-rounded character and is good at keeping secrets, although she's not the best at keeping the right secrets. What I like about her is how even though she's been taught her whole life to hate a certain type of people (witches, wizards, and the like) that she was still open-minded enough to see that it's not magic that makes you good or evil, it's your choices.

Nicholas is pretty cool. I liked him a lot. He's the character who you think you are beginning to know and then you're not quite sure  I want to know more about him and about his past.

I will say, I enjoyed Boecker's writing style. She was able to get me into the story with a clear vision of being with the characters.