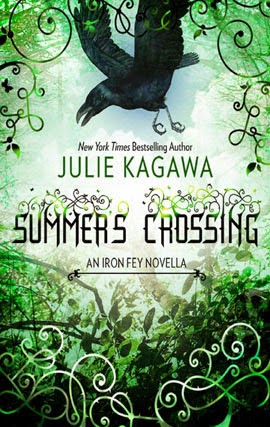 A Midsummer's Nightmare? Robin Goodfellow. Puck. Summer Court prankster, King Oberon's right hand, bane of many a faery queen's existence—and secret friend to Prince Ash of the Winter Court. Until one girl's death came between them, and another girl stole both their hearts.

Now Ash has granted one favor too many and someone's come to collect, forcing the prince to a place he cannot go without Puck's help—into the heart of the Summer Court. And Puck faces the ultimate choice—betray Ash and possibly win the girl they both love, or help his former friend turned bitter enemy pull off a deception that no true faery prankster could possibly resist.

As you probably know, I have been reading the Iron Fey series lately, and I have just finished novella 3.5, Summer's Crossing.

This novella was from Puck aka Robin Goodfellow's point of view. And I have to say, he is by far the funniest and best person to read about in first person. Finally, after all these books, I was able to see how truly funny Puck is, but also that he has a serious side. A side where he is fiercely loyal and loving.

We follow Puck and Ash through the best prank Puck has made yet. It's a fun and captivating idea that kept me smiling and hoping that it, like every one of his pranks, would be successful. Because sometimes you never know, maybe the author might switch things up a little. Thankfully, Puck lived up to his prankster ways. He also had a choice to make in this book. A choice where he could end up having Meghan. And yet, did he take that chance...?

I admire Puck for his loyalty. I love that he found Ash and invited himself along for the ride of finding a way to bring Ash and Meghan back together. Although that's not exactly how he sees it, he is motivated by the right reasons. Puck still considers Ash to be his friend, despite the last couple of centuries of strife, and the feeling is obviously mutual. Puck knows that Meghan is truly happiest with Ash, and that if Ash died on this long journey, a large part of Meghan would die along with him.

So, even though Puck is in a position he absolutely loathes, he still watches out for those he loves. He is old and wise (despite his prankster side) enough to see what is really happening. He may be jealous, but he isn't that stupid guy in the love triangle we hate because they try to hard. Yes, Puck loves Meghan. Which is why he is doing exactly what he is doing.

And that's why I like Puck so much. He isn't a pushover. He isn't a whiner. He's a doer. Even when his heart is broken, he takes action. And he usually makes the right choice.

As he did in this novella.