The Regency Tour Launch- A Perfect Secret by Donna Hatch

We're launching THE REGENCY TOUR for

7/1
Cherry Mischievous
Kelly P's Blog
I Am A Reader

7/3
Getting Your Read On
Mel's Shelves

7/7
I Love to Read and Review Books :)
Southern Chelle 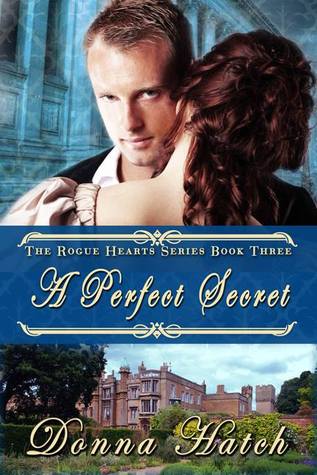 Desperate to protect her father from trial and death, Genevieve breaks off her engagement with Christian Amesbury and marries a blackmailer. After a year of marriage, she flees her husband's violent domination only to have fate bring her back to Christian. Just when she thinks she's started a new life of safety and solitude, her husband tracks her down, stalks her, and threatens everyone she loves.

Still brokenhearted over Genevieve's betrayal a year ago, Christian can't believe she's come back into his life--and worse, that she's done it on the anniversary of his brother's death, a death that haunts him. Though tempted to throw her back into the river where he found her, he can't leave her at the mercy of the terrifying man she married.

When her husband torments Genevieve and puts his family in danger, Christian will do anything to protect those he loves...anything except give Genevieve another chance to break his heart.

More About A Perfect Secret and Its Author, Donna Hatch

What is your motivation behind this book? Why did you want to write it?

I wrote this book pretty much for the same reason I write anything--because I get a story idea that haunts me and I finally start writing it. So, yeah, I basically succumb to the voices in my head. It's an inevitable ending. You do know that writers are basically schizophrenic, right? Most of us are non-violent though. We prefer to torture fictional characters, not real people. Of course, sometimes fictional characters seem more real, and certainly more interesting that real people. But I digress.

A Perfect Secret, in particular, began partly because my editor encouraged me to write a story about each brother in the family so it could be a familial series which typically sell better than single title or books with only a second book. Originally, there were two brothers in the Amesbury family, but she suggested I should have at least three books in the series. It was her idea that the Bow Street Runner in the first book, The Stranger She Married, could be a brother, hence Grant was born. I am writing his story now. He's not a true Runner, just someone who helps them from time to time. Christian, the hero of A Perfect Secret, appeared of his own accord during a revision of The Stranger She Married. I knew right off that he needed his own book, too. I had the idea for A Perfect Secret years ago about someone trying to leave her abusive husband (no, this is not based on my marriage :-) and her husband chasing her down and stalking her. The plot solidified a bit more when I saw the movie Sleeping with the Enemy, but with a number of obvious differences. The first draft of the story had the heroine in love with someone else, whom her husband kills, and the hero was "just a friend" with whom she ended up falling in love. But this version worked better.

What do you hope readers take with them when they read your book?

I hope they will believe that love is real and it can help us find the courage to do what we believe is right. I also hope they will question what they think they know about people and let go of prejudice, and even help them forgive those who have hurt them.

Do you have a favorite scene?

I have several favorite scenes. The opening scene ranks up near the top because it's so emotional. And I really love the scene where the heroine first starts to believe that maybe she can trust the hero. I also love the scenes with Christian's sister Rachel because she's so outspoken and they have such fun sibling banter. Sooo, a favorite? Actually, taken out of context, the other scenes probably wouldn't have much of an impact for a reader. So I'll share the first paragraph of the opening scene. This chapter takes place when the hero is a child. But I promise, the rest of the book is when he is an adult.

Six-year-old Christian Amesbury stood in the churchyard, trying not to crush the flowers he’d brought to put in front of the family crypt where they’d laid his brother to rest, the brother he loved, the brother he killed.

Alone in every way, he stood, shaking, as his last taunting words to Jason echoed in his head. Christian had wanted to prove he was brave and strong. Instead, his brother, best friend and advocate, was dead.

His throat tightened and tears blurred his vision. “I’m sorry, Jason,” he whispered. “I’m so sorry. I miss you.” He knelt and placed his offering of wildflowers in front of the crypt.

A drop of rain landed on his cheek and mingled with his tears. He stood unmoving, embracing the desolation. He had no one to blame but himself.

Share something about you that is unique - maybe about how/where you write... or favorite snack foods?

I have trained myself to write on the fly. That may be when it's slow at work, while dinner is simmering, or in the waiting room of a doctor's or dentist's office, or during soccer practice, or whenever I think I may have at least 15 minutes to write. If I'm really struggling with a scene or with edits and I find myself trying to put it off, I line up bite-sized chocolates, like Dove or something equally indulgent, on my desk in front of the computer screen. I eat one and start to work. When I get stuck on something, or just when I feel like it, I eat another one. It helps. I've discovered chocolate is the solution to many of the world's woes. If politicians would begin negotiations with chocolate, everyone would be on better behavior.


My passion for writing began at the tender age of 8 and I’ve been hooked ever since. Of course, I also wanted to be an actress and a ballerina, but one out of three isn’t bad, right?

In between caring for six children, (7 counting my husband), my day job, my free lance editing and copy writing, and my many volunteer positions, I manage to carve out time to indulge in my writing obsession. After all, it IS an obsession. My family is more patient and supportive than I deserve.

- Grand Prize: $20 Amazon gift card and an ebook (INT) or print copy (US Only) of A Perfect Secret OR The Stranger She Married (winner's choice)

- 5 ebooks of A Perfect Secret