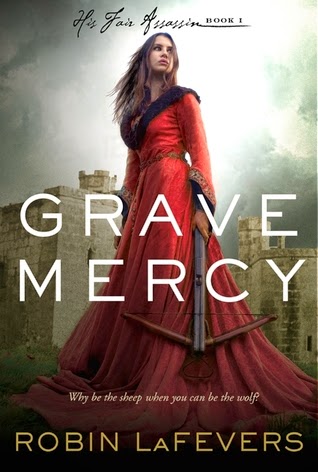 Seventeen-year-old Ismae escapes from the brutality of an arranged marriage into the sanctuary of the convent of St. Mortain, where the sisters still serve the gods of old. Here she learns that the god of Death Himself has blessed her with dangerous gifts—and a violent destiny. If she chooses to stay at the convent, she will be trained as an assassin and serve as a handmaiden to Death. To claim her new life, she must destroy the lives of others.

Ismae’s most important assignment takes her straight into the high court of Brittany—where she finds herself woefully under prepared—not only for the deadly games of intrigue and treason, but for the impossible choices she must make. For how can she deliver Death’s vengeance upon a target who, against her will, has stolen her heart?

This was certainly an interesting story. It almost felt like I was reading Poison Study again. The uniqueness of this book was that it was historical fiction, and a lot of the characters actually existed. The worship of saints and the character's devotion to them was intriguing.

Ismae was a strong female lead. She came from horrible circumstances, but made a stand for herself. She did what she thought was right, even when everyone else disagreed. I liked how she thought for herself and wasn't just a mindless drone for her convent. Although I didn't connect with her right away, she was a pretty good lead.

Duval. I like him. I liked his devotion to help his family, specifically Anne. It must have gone past me, but I totally forget Anne was twelve, because she sounded older--closer to Duval's and Ismae's age. Still, Duval kept Anne safe from the many suitors and traitors who threatened to take over Brittany. Despite everyone turning against him, he remained and did everything in his power--even when almost dying--to keep his family safe.

This was a good book, but the voice wasn't entirely unique. I felt like I was reading Poison Study or during the assassination parts, Throne of Glass. I'll continue the series, though. The fact that it is set during real events is really cool. You can tell the author really did her research.