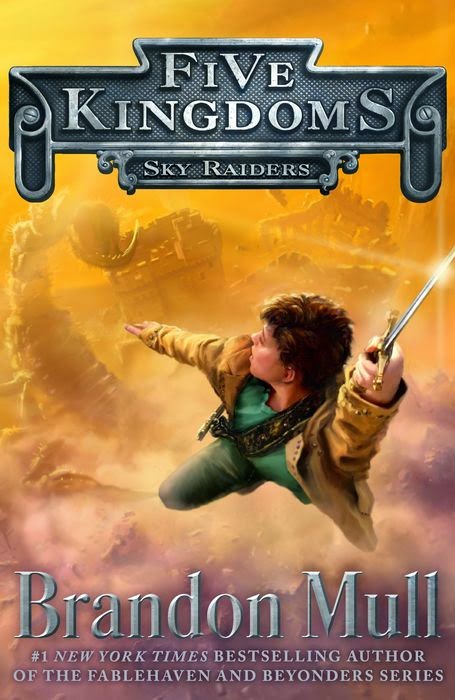 Adventure awaits in the Five Kingdoms come and claim it in this start to a new series from the #1 New York Times bestselling author of the Fablehaven and Beyonders series.

Cole Randolph was just trying to have a fun time with his friends on Halloween (and maybe get to know Jenna Hunt a little better). But when a spooky haunted house turns out to be a portal to something much creepier, Cole finds himself on an adventure on a whole different level.

After Cole sees his friends whisked away to some mysterious place underneath the haunted house, he dives in after them and ends up in The Outskirts.

The Outskirts are made up of five kingdoms that lie between wakefulness and dreaming, reality and imagination, life and death. It&#8217;s an in-between place. Some people are born there. Some find their way there from our world, or from other worlds.

And once you come to the Outskirts, it is very hard to leave.

With the magic of the Outskirts starting to unravel, it is up to Cole and an unusual girl named Mira to rescue his friends, set things right in the Outskirts, and hopefully find his way back home before his existence is forgotten.

Brandon Mull has been one of my favorite authors since I read his Fablehaven series. I was young enough back when that series first came out that I was it's target audience. It was Fablehaven that got my imagination running and my love for reading blossoming. It was amazing to meet him at the ANWA Conference and have my books signed. He's a pretty cool guy and has an awesome sense of humor. I have been wanting to read Five Kingdoms since it's release.

Sky Raiders follows sixth grader Cole into a world where just about anything can happen. There are five distinct types of magic, but in this book, we only see one. Cole and his friends become slaves. Cole must endure raiding flying castles, slavers, an unknown world, and a magic entity that controls itself. Along the way, he meets Mira, Twitch, and Jace.

Mira is awesome. She's eleven, although looks are somewhat deceiving. She is intelligent and kind. Not to mention brave. She has been in hiding for years, and now everything is falling apart, yet she remains strong.

Twitch is a funny kid. He's sort of jumpy, as his name implies, but he's a loyal friend. He may not be a fighter, but he's really good at the behind the scenes stuff in a fight.

Jace is sort of a jerk. I wanted to slap him upside the head a few times. Yet, he is a fierce fighter, and despite his annoying personality, he's devoted to helping Mira's cause.

Cole handled everything pretty well. I liked that about him. He didn't forget his family, rather wondered about them a lot. He wanted nothing more to save his friends, but like I mentioned earlier had a lot of obstacles to go through. I admire his bravery. It was fun following him around the world of the Outskirts and Sambria.