The Sacrifice: A Review 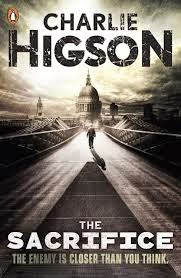 The sickness destroyed everyone over the age of fourteen. All across London diseased adults are waiting, hungry predators with rotten flesh and ravaged minds.
Small Sam and his unlikely ally, The Kid, have survived. They’re safe with Ed and his friends at the Tower of London, but Sam is desperate to find his sister.

Their search for Ella means Sam and The Kid must cross the forbidden zone. And what awaits them there is more terrifying than any of the horror they’ve suffered so far . . .

Another creepy installment to The Enemy Saga. In this one, Small Sam is back in the story. We follow him and the Kid, as well as Ed, and Shadowman. This group of characters is the one I've grown a fondness for. I super hope they end up surviving. In this book, at least, they do. Sure plenty of other kids they travel with die, but it's an apocalypse book, so what can you expect?

This is one graphic series. My gag reflexes have certainly been triggered. The sickness that has spread over the adults reduces them to walking corpses covered in boils and dying flesh. Blech. Digusting.

And yet, these kids are hardened to it. Sure in extreme cases they still are grossed out, but mostly they ignore it. I suppose if that was my everyday, I would do. Thankfully it's not.

And not only are the adults zombie-like, but they are starting to organize. Which is super freaky. They are somehow communicating, gaining up on the kids. And, some of them can talk. No longer are they mindless freaks. They're still freaks, but now intelligent.

Their intelligence gives us insight on the disease, plus the one who can talk knows things. I'm beginning to believe there's a heck of a lot more to thus disease then simply mindless, cannibal adults.

*Shudder* Seriously, thus series creeps me out more often then not.