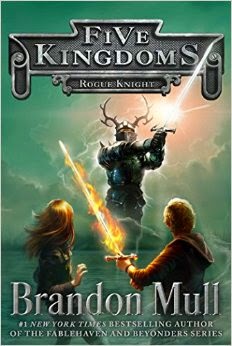 Magic and danger abound in the second book in a series of fanciful, action-packed adventure; (Publishers Weekly, starred review) from the #1 New York Times bestselling author of the Fablehaven and Beyonders series.

Cole Randolph never meant to come to The Outskirts, but when his friends were kidnapped on Halloween he had to try and save them. Now he's trapped in a world that lies between wakefulness and dreaming, reality and imagination, life and death.

Cole's search for his friends has led him to Elloweer, another of the five kingdoms that make up The Outskirts. He's accompanied by Mira, Twitch, and Jace, new friends he's met here in the Outskirts who each have their own important missions.

The group is following news that Mira's sister, Honor, could be in danger. However, Cole and Mira are soon the ones facing direct threat, and must resort to a fascinating new kind of magic to protect themselves. Their journey brings them across familiar faces, some more welcome than others, until their paths ultimately cross with the infamous man known throughout Elloweer as the Rogue Knight.

Will he turn out to be an unstoppable enemy, or a key ally?

Every move is filled with danger as Cole and his new friends try and outwit the High King, who will stop at nothing to regain what he has lost.

This was a great sequel! It was strong and packed with adventure.

Cole has decided to stick with Mira, Jace, Tiwtch, and now their adult friend, Joe. They have entered a new kingdom, Ellower. Here, the magic is different than Sambria, and their magical objects no longer work. Not only that, but the guards chasing them have increased, there is a Rogue Knight robbing people, and a creature of immense power called Morgassa.

There are a lot of ups and downs for Cole in this one. At times he questions whether he should stay with Mira, but ends up deciding staying is the best. I like how he keeps his options open, while still remaining loyal to his friends. Cole has a lot of goals, and he does well with finding out the best way to merge them together. I like how he thinks things through--it definitely saves him from some tricky situations.

In this story, with all the above mentioned obstacles, Cole is on his way to find Mira's sister, Honor. Although Cole is far from perfect, I believe he does well with the choices he was given when it came to saving her. I won't give specifics, but he was pretty awesome.

The gang of kids meet some new friends in Ellower--as well as finding some old ones. Skye was my favorite. Her illusionary powers were wicked awesome. Her quit wit saves Cole's gang several times over. I also enjoyed seeing the kids have some adult help. In many YA and MG books, adults are looked over. It was fun having them be a part of the adventure.

This was a great sequel! My only issue was that it was a bit slow a parts, but the world building during those parts made up for it.