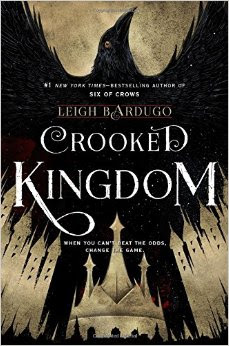 The hotly-anticipated sequel to the Carnegie Medal 2017 nominated SIX OF CROWS, this is GAME OF THRONES meets OCEAN'S ELEVEN in a fantasy epic from the number 1 NEW YORK TIMES bestselling author Leigh Bardugo.

Welcome to the world of the Grisha.

After pulling off a seemingly impossible heist in the notorious Ice Court, criminal prodigy Kaz Brekker feels unstoppable. But life is about to take a dangerous turn - and with friends who are among the deadliest outcasts in Ketterdam city, Kaz is going to need more than luck to survive in this unforgiving underworld.

As gripping, sweeping and memorable as the Grisha trilogy - SHADOW AND BONE, SIEGE AND STORM and RUIN AND RISING - this novel is perfect for fans of Laini Taylor, Kristin Cashore and GAME OF THRONES.

Trouble is on the home front for Kaz now. After his awesome heist, and after being burned...he has a lot to deal with.

It's a good thing he has his friends.

The first book, Six of Crows, was full of adventure and intense moments, but here in this novel, even though we still have these moments, we get to know more about the characters and their stories--especially Kaz.

I came to love them all more than ever. Truly, I don't think I'll ever forget this series. I may forget the character's names after some time, but not the awesome people they were, despite their lifestyle.

And, may I say, it was about time Kaz and Inej did something about their not admitting they liked each other!

This book was filled with sorrow and happiness, wins and losses. If you loved the first book, you will definitely love this one.