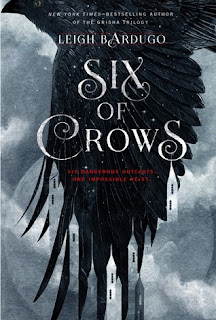 Criminal prodigy Kaz Brekker has been offered wealth beyond his wildest dreams. But to claim it, he'll have to pull off a seemingly impossible heist:

Retrieve a hostage
(who could unleash magical havoc on the world)

Survive long enough to collect his reward
(and spend it)

Kaz needs a crew desperate enough to take on this suicide mission and dangerous enough to get the job done - and he knows exactly who: six of the deadliest outcasts the city has to offer. Together, they just might be unstoppable - if they don't kill each other first.

Kaz Brekker is probably the coolest bad guy I've ever read about. He's known for his gloves and his cane. He is feared throughout his city, for he owns it, and now...he needs help acquiring money beyond his wildest dreams.

The team Kaz puts together is filled with ruffians and scoundrels who walk the streets, stealing, gambling, plotting, killing. And when put together, they make a deadly group. They also make a hilarious group. Not all of them get along, and it makes for some good laughs--however sometimes their fights worried me. I like all of them together.

So Kaz, being very full of himself decides he needs to break into the unbreakable. Kaz's genius is shown throughout this whole book. He boggles my mind. If he were real, I might try to befriend him (he'd probably scare me too much to get too close to him though...)

If you love a story filled with magic, thievery, and well-rounded characters then this book is for you.

Let's take a moment to appreciate the fan art here too. I can't really chose a favorite, but Jesper is perhaps the funniest, and if I were in this series, I would be Inej.