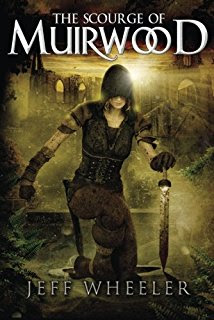 The Scourge of Muirwood is the final installment of the Muirwood Trilogy.

Upon discovering she is the lost heir of Pry-Ree, Lia is forced to leave the protection of Muirwood once again. She embarks upon a perilous journey across the kingdom where she avoids capture and begs passage on a ship bound to Dahomey. Lia's safety is in further jeopardy when she finally reaches Dochte Abbey and learns the hetaera have taken control. Lia must gather all her strength and muster the courage to defeat them, for if she fails, the consequence would be a world in ruin and the shattered lives of those she loves.

Lia is now faced in a world overtaken by the evil hetaera--an evil group of women bent on destroying the world and the Medium. Lia must resist the call of their evil persuasions. Again, Colven has been separated from Lia, having to protect the fake heir of Pry-Ree. It kills me that Lia is forced to keep quiet about the truth... if only Colven knew the truth...

What's worst of all is everything and everyone is depending on Lia. The Aldermaston has helped Lia as much as he can and again, she is on her own. Her power in the Medium is stronger than ever, though.

This was a fantastic ending to a wonderful series. Although I wouldn't say it was exactly happy, it was perfect. This will series has made it to my mental list of favorites--which is a hard thing to do, mind you.