I’d like to welcome A.J. Baczek, author of All the Difference to my blog today!  I also want to thank her for being my FIRST author interview! 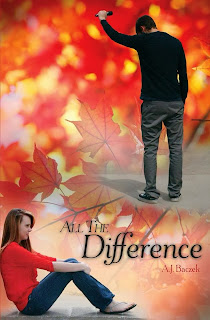 When did you decide to become a writer???
I'd say the writing bug officially bit me when I was in high school. At the time, my first love was writing screenplays, but as I moved into adulthood I decided I was more interested in novels. I've actually taken some of those old ideas and expanded on them as I work on my novels. I fell in love with the detail, description, and character development that just isn't the same when you're writing something meant for the screen or stage. Up until mid-2012, writing was just a hobby for me. Once I really got into All the Difference, I realized that I couldn't just leave my books on my computer where no one would ever have a chance to see them. I had to share my characters and their stories with a much wider audience, and that's when I decided to venture into self-publishing.

Why do you write?
At this point, I'm honestly not sure if I could stop if I tried! While I've always enjoyed writing on some level, it really hit me as I was writing my first novel, and I fell in love with the process. It energizes me like nothing else ever has, and I love being able to enter this sort of alternate reality that I've created in my own head. I'm not sure how to describe the way it makes me feel, other than to say that my characters feel like my friends, and their lives are so intertwined with mine that I can't cut them off. I can't get rid of them, so I might as well entertain them. :)

Do you have a special time you like to write or do you just sit down whenever inspiration hits you?
I can't always write at the exact moment inspiration strikes, but right now I am fortunate to have a very flexible schedule that allows me to spend most of my day writing. In those moments when I can't be at my computer, I have a notebook handy to jot down ideas so they don't disappear on me.

Do you work to an outlined plot or do you prefer to just see where the characters take you?
I do not outline! Can't stand outlines ;) I usually start with some idea of where I want things to go, but oftentimes I find that my characters have a different idea, and I allow them to take me wherever they want to go. Their plans are usually better than mine, anyway, and I learn an awful lot about them in the process if I don't insist on sticking to my original ideas.

What is the hardest part about writing?
I have this obnoxious habit of being insecure about my writing. I worry that it isn't good enough or accurate enough or that it won't appeal to readers, or that I'll somehow make a drastic mistake. I've learned that there is no right or wrong way to handle most parts of the writing process, and if I keep telling myself that, it gets easier. Particularly with All the Difference, I was constantly asking for feedback from beta readers on sections of the book that I really didn't need to ask questions on. I was insecure in my own abilities and didn't trust my own ideas, and I learned that most of the time, I should have trusted those ideas. Overcoming that insecurity and allowing myself to "just write" has probably been the hardest part of the process for me.

What brought you to the decision to write All the Difference?
All the Difference started as a short screenplay that I wrote when I was a teenager. I decided about ten years later that I wanted to take that same idea and "adapt it" into a novel. I started with a similar concept to my original work, and expanded on it from there. The characters definitely evolved and changed, as did their story, and I was able to look at things from an entirely different perspective as an adult.

What characters did you consider the hardest to write about?
This question totally stumped me! Thinking back on the process, I would say it was most difficult for me to make sure I accurately portrayed the relationship between Angela and David, who are two of the teachers in the novel. I wanted to make sure I stayed true to both of them as individuals, but also to their relationship. Even though I knew how their story was going to play out, there were moments when I'd get stuck and have to figure out how to develop their relationship, or where I'd ask people questions to make sure I was taking things in a realistic direction.
I love those two!  They made me happy, mad and sad!  You have such great characters in your book!

Tell us about the cover and how it came about!
I was in the market for a cover designer and was introduced to a friend-of-a-friend back in Arizona who does graphic design for a living. He agreed to work on my novel as a side project. I gave him a few general ideas along with the photos that are now on the cover. The two people on the cover are actually my cousin and a friend of his who he grew up with. The designer sent me several different "mock-ups" of the cover, and I emailed him back and forth with feedback until we ultimately arrived at the current cover. I knew I wanted the two main teenage characters to be featured somehow, and I liked the idea of incorporating the fall to winter seasons that make up a large portion of the story.

What genre do you think your book falls under?
I always classify my work as general fiction, but All the Difference also managed to find itself in the Young Adult genre as well, which to be honest was totally unintentional on my part. It does fit, though. I think the novel has an appeal for young adults, but also for those who are into their 20s, 30s, and even older. I think every generation has something they can learn or take away from the characters in the novel.
I agree!  I still feel that everyone should read this book!  Especially parents of teenagers, or teenagers themselves!  There is just such a great lesson about learning to be yourself!

What is the most satisfying thing to you about being a writer?
I would say the ability to create stories that readers enjoy. I have so much fun while I'm writing, but it's even more exciting for me when I realize that there are other people out there who enjoy my characters and their stories. It's my hope that my novels can also help readers identify with the characters on a personal level, and apply the lessons and challenges my characters experience to their own lives. I've found that many people read fiction to escape reality, and I hope the alternate reality I create inspires, energizes, and sticks with my readers, challenging them while also giving them hope for their own lives.

Who are 3 of YOUR favorite authors???
In all honesty, I have not been much of a reader over these last few years (bad AJ!) I am consciously working on this, because I do believe writers must also be avid readers. Nicholas Sparks has been a longtime favorite for me. Just recently I discovered Michelle D. Argyle and Kevin Alan Milne, and I absolutely love both of them. Amazing writers!

Do you have any other books in the works??
I have two novels in the works! One is tentatively titled Without Condition and deals with the struggles of a single father and his young son. I'm hoping to have it published in early 2014. My third project is very much in the beginning stages, but it's keeping me occupied and I'm excited to see where the characters lead me on this one. It's definitely a project that is taking me out of my comfort zone (in a good way!)

Thank you A.J.!  That was so much fun!  Thank you for taking time to answer my questions!  I look forward to your new books coming out, and hope to be able to interview you again!

You can find A.J. Baczek here on Facebook, here on her blog, and here on Goodreads!  You can purchase her book by clicking here: Amazon or here: Barnes & Noble!  You can also enter the give away for one of two signed books of All The Difference to add to your shelf! 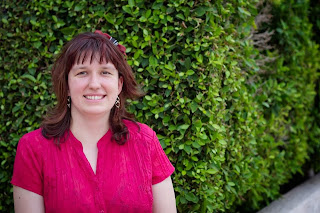 picture and description taken from Goodreads

A.J. Baczek fell in love with writing at a young age. She has a collection of poetry, stories, and screenplays, most of which were written during her teenage years. She entertained the idea of a few career choices before realizing that her true passion is and always has been the written word. She is in the process of taking her past creations and transforming them into reader-worthy novels, along with several new ideas that she has up her sleeve. When she is not writing, A.J. enjoys reading, conversations with friends, hiking and tennis. She lives in the Pacific Northwest with her two crazy cats.