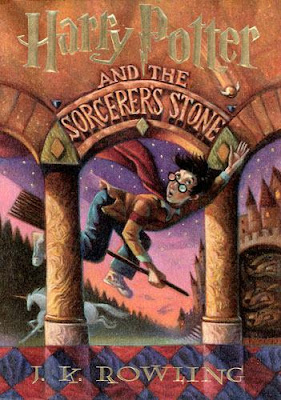 Harry Potter thinks he is an ordinary boy. He lives with his Uncle Vernon, Aunt Petunia and cousin Dudley, who are mean to him and make him sleep in a cupboard under the stairs. (Dudley, however, has two bedrooms, one to sleep in and one for all his toys and games.) Then Harry starts receiving mysterious letters and his life is changed forever. He is whisked away by a beetle-eyed giant of a man and enrolled at Hogwarts School of Witchcraft and Wizardry. The reason: Harry Potter is a wizard! The first book in the "Harry Potter" series makes the perfect introduction to the world of Hogwarts.
My Review:

Now, now. Let me tell you. I have read and listened to this series many a time before. But, I decided it was time to listen to them once more.

Jim Dale, man. He's the BEST audio book reader I have ever listened to before. He makes voices for each of the characters, and gets so into their emotions too. I love it! I will never get tired of listening to his voice. Honestly, I would listen to any audio book done by him because he articulates so well.

Harry Potter. I know this is supposed to be a review, but honestly. This is one of my ultimate favorite series and has been since the minute I read the first book. My mother used to listen to Harry Potter in the car on road trips before I actually read the series for myself. I've grown up with Harry Potter and when the last book and movie came out I didn't know what to do with myself.

J.K. Rowling is an incredible author. This world of magic she has created still affects me today. I love her character development.

Harry faced Hogwarts head on, ready to learn about this secret world he's never known. It was nerve racking, but he still went for it. He stood bravely before Professor Quill and Voldemort. He is the epitome of bravery.

Hermione is awesome. She is incredibly smart naturally and because she works so hard at it. Funny thing is, up at school, my classmates have nicknamed me Hermione because they know how hard I study and work for my good grades. I consider it an honor. Growing up I always looked up to Hermione. Without her, Harry and Ron would have probably died.

Ron. Gotta love him. He gets riled up real easy, but he's fantastic and has a great heart. He may act like a wimp at times, but he too has a heart of bravery. I love his loyalty.

Neville. Considering how I know the series end and how all the characters grow up, I was quite interested in Neville this book. In all honesty, I believe he has done the most character growth. Harry, Ron, and Hermione expand in the characteristics they already have, but Neville gains more throughout the series. Seeing him in the beginning was a sure sign of just how much growth he has done.

It was fun to see Dumbledore too. I forget how odd and fun he is. The movies don't do it justice. I love it though, to see the fun side of him before it all gets so serious.

I just...I love this series and it makes me beyond happy to revisit it.

I got the illustrated version of this book for Christmas. And I hope to collect them all.