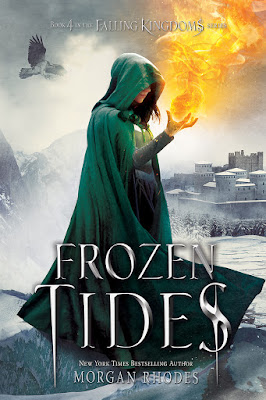 CLEO: Reeling after a bloody showdown in Limeros ending with Amara’s abduction of the water crystal, and a vacancy in the Mytican throne, Princess Cleo must cast aside her feelings and look toward her kingdom with the eyes of a Queen.

MAGNUS: With the kingdom in chaos, Princess Lucia still missing and quite possibly in danger, and a shocking realization about Cleo, the steely prince is once again torn between love and duty, leaving him wondering whether he’s strong enough to rule his people.

LUCIA: The young sorcercess has had her vengeance after the cruel death of her first and only love. Heartbroken and unable to trust anyone, she allies with the awoken Fire god, who also seeks revenge.

JONAS: After escaping death by the skin of his teeth, the defeated rebel—along with a mysterious stranger–leader reunites with Princess Cleo, only to find himself a mere pawn in a dangerous hunt for the elusive Kindred.

KING GAIUS: Abandoned by Melenia and betrayed by his own children, Gaius flees Mytica and sails to Kraeshia, where he attempts to ally with the famously brutal emperor across the Silver Sea.

This series has been quite the roller coaster of surprises and plot twists (P.S. if you haven't read this series, my review has some minor spoilers).

And this installment was no different. Man oh man. If you haven't read this series, I strongly suggest it.

Jonas, despite ALL his MANY failures, continues to fight for what's right. He stands up for those who are unable to fight. He is a leader in so many ways, loyal, kind, and smart. Yes, he messes up a lot, but he learns each and every time how to go about his plans better. Though people have hurt and betrayed him, his heart has stayed good. He lives in a world of pain and sorrow, but somehow he is still able to function and move forward. It's incredible. He is becoming one of my favorites.

Magnus. I love him. This may sound strange, considering those who have only read the first two books, but yes. I do in fact love Magnus. I have since the beginning. There is so much potential for him to be good, and I believe he is finally realizing that for himself. He is finally making a stand for what he believes is right, instead of blindly following in his terrible father's footsteps.

Cleo. She's growing on me more and more. She's a girl who knows what she wants and will do anything to get it. Although she grew up a spoiled brat, she has grown up loads in the series. It's not about parties and drinking anymore, rather, it's about trying to save her kingdom and her people. She is finally looking beyond her own cares and needs, recognizing that she has the power to help people. And I think that's awesome, especially considering the sort of terrible person she was before.

Lucia. She's wacko crazy. Super cucukachoo. She has been so manipulated throughout her whole life that now she's free, she doesn't know what to do with herself. Lucia believes she wants one thing, then does a whole 360. Make up your mind woman! She's incredibly frustrating and frankly scary. Her power is incredible, but she is extremely unstable--which makes her a formidable opponent.

I also think King Gaius is an idiot. He's Magus and Lucia's dad. He was super scary before, but through his actions in this book, he just proved himself to be incredibly stupid. In fact, I am quite confident all the above characters will be able to end his reign. He's beyond mad, he's insane which causes him to react instead of act--leading to his stupidity.

There are loads of characters in this series, but these are the main four (five including Gaius) from the beginning. Most of my reviews focus on the characters, because that's how I come to love a series. Falling Kingdoms is set in a mythical world where magic is rampant and the characters are searching for four stones--water, earth, air, and fire--aka the Kindred. All the Kindred have been located now, and now we must see what the characters will do with this power in the next book. It's finally getting down to the nitty gritty and I feel the next book will be an explosion of surprises.