Castle in the Air: A Review (Howl's Moving Castle #2) 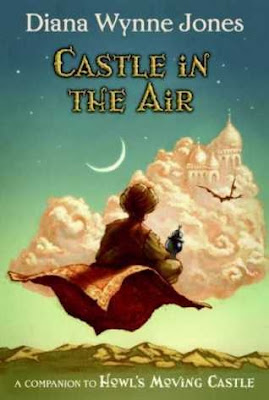 
In which a humble young carpet merchant wins, then loses, the princess of his dreams
Far to the south of the land of Ingary, in the Sultanates of Rashpuht, there lived in the city of Zanzib a young and not very prosperous carpet dealer named Abdullah who loved to spend his time daydreaming. He was content with his life and his daydreams until, one day, a stranger sold him a magic carpet.

That very night, the carpet flew him to an enchanted garden. There, he met and fell in love with the beauteous princess Flower-in-the-Night, only to have her snatched away, right under his very nose, by a wicked djinn. With only his magic carpet and his wits to help him, Abdullah sets off to rescue his princess....

You know, I read the third book before reading this one, because I thought Sophie and Howl wouldn't be in this book...Well, I was wrong. So yeah, definitely read these in order. Granted, it didn't give too much away and since the stories are about different people, it was find reading them out of order.

One thing I really liked about this book compared to the first and third is that this book had far more action in it than the others. A lot more happened and I feel that I got to more the characters more. Abdullah was truly an interesting character. Not that Charmain wasn't, but... Abdullah just had more depth and history to him. He was put in so many strange situations, and yeah, at times it got hard and he made mistakes, but he always fought for what's right. I appreciate that in a character. Because life is hard, but when people learn to look on the bright side, they find that everything always works out. And that's exactly what Abdullah did.

Another thing I really liked was the variety of magics in this book, and the way we got to see more of the world Jones created. There were djinns, angels, geneies, wizards, and witches. Seeing how the different magics reacted with each other was quite fun and entertaining. It was great world building and fun to see the landscapes and the different cultures and peoples. Jones has created a wonderful, imaginative place.

Flower-in-the-Night, a princess and Abdullah's love interest, is a really unique name. One thing I love about names is their being unique. Also, despite the way Flower was raised, she is one smart girl. I appreciated how Jones held to her naivete, but still allowed Flower to show her intelligence.

One thing I didn't like about this story was how quickly Flower and Abdullah "fell in love." Granted, most of it was considered fate and magic, but eh. At least, Flower got kidnapped so they couldn't act stupid like most insta-loves. And actually, when they finally met again...twas sweet and realistic... At least, as realistic as you could get :)

Honestly, though. The adventure in this story was fun and it was a great way to get to know Abdullah and the soldier 'friend' he acquired. There were some great plot twists, and of course, we got to see Sophie and Howl again!!