Winter: A Review (The Lunar Chronicles #4) 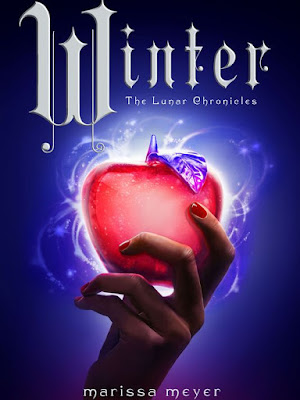 Princess Winter is admired by the Lunar people for her grace and kindness, and despite the scars that mar her face, her beauty is said to be even more breathtaking than that of her stepmother, Queen Levana.

Winter despises her stepmother, and knows Levana won’t approve of her feelings for her childhood friend—the handsome palace guard, Jacin. But Winter isn’t as weak as Levana believes her to be and she’s been undermining her stepmother’s wishes for years. Together with the cyborg mechanic, Cinder, and her allies, Winter might even have the power to launch a revolution and win a war that’s been raging for far too long.

Can Cinder, Scarlet, Cress, and Winter defeat Levana and find their happily ever afters?

I think I might cry. What am I going to do with no more Lunar Chronicle books?

This series has become one of my all time favorites. And the end just sealed the deal.

A perfect end to a beautiful series. I LOVE the way Marissa Meyer writes. She is clean and funny, while still maintaining intense action and clean sexual tension. The pace never slows and her characters are to die for.

WOLF!!!!!!!! (aka Ze'ev) I love him. What more is there to say? Read the series. He's so sappy and cute even though he's a hulking, scary looking beast on the outside. I want a Wolf. He's so perfect.

Scarlet is pretty awesome too. She's a no nonsense kind of girl. Don't you mess with her, because she can handle herself and then there's Wolf, who might rip our face off if you hurt her.

Cress. Sweet, innocent, shy Cress. Basically, her introvert tendencies were very relateable, but she was still able to stand her ground and state her opinion, even if she was shaking the whole time.

Throne. He is my second favorite. I also love him. His humor literally made me laugh out loud since the minute he entered the series. He is strong and handsome and willing to do the right thing even though his past says otherwise. When he sees the truth, he is willing to change, and that's an awesome characteristic to have, a strong one too.

Jacin kind of annoyed me at first, but my heart opened up to him during this book. Once I realized his motives and figured out why he did what he did, I started to like him. He's incredibly stubborn, but he's down to earth and knows how to handle anything.

Winter. Hehe. She's freaking crazy, but I love that about her. She handles herself well, despite her hallucinations and babble. She is the kindest and most loving, despite all the torture she's endured. She is capable, even when everyone believes she will fail, she succeeds. And I find that awesome!

Kai. Yes. I also adore him. I love how he was willing to give everything for the welfare of his people, even if it meant giving up his own life.

Konn Torin. He's amazing. Kai wouldn't have survived without him. Plus, he's basically like the guy who knows how to handle everything, but also lets the others make their choices and supports their actions (as long as they are doing the right thing).

Iko is also super funny. Her humor just made my day, espcially since there were lots of dark days in this series. I love how loyal and kind she is. It's also fantastic at how much she fights for android rights. She's awesome.

And Cinder. Dang that girl has grown up. She is awesome. All throughout her life she has been given crap and treated like a slave. Yet, she rose above it all in order to fight the Lunar suppression and take back what was hers. She had her down days, she had her hard times, but she made it. She stayed strong, even when she wanted to fall apart. She had her friends above to help her through the trials she had to endure, they were good to her and she was good to them. I can't help but think that she, Scarlet, Cress, and Winter became sisters throughout this series. The sense of sisterhood was strong and I really loved that.

Honestly, this series is beautiful. It's so much fun and the BEST fairy tale retelling I have ever read ever.