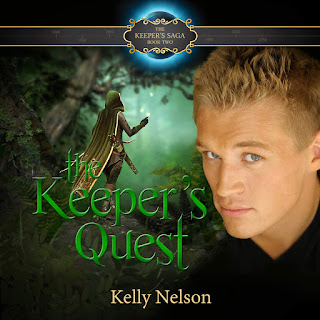 A tragic death. A fatal trap. A daring quest.

"I woke to the flash of counter coordinates and a rush of adrenalin. Suddenly, it hit me. I was a pawn in someone’s game of chess, and I’d just been moved. Master Archidus required my services. I was a Keeper—the Protector, to be specific. I hadn’t wanted this, but I wouldn’t shun my duties, either. The other Keeper’s life wasn’t the only one at stake." —Chase Harper

After a turbulent start to his senior year, Chase expects his life to return
to normal now that Ellie Williams is back. But when a Sniffer’s trap leads him on a journey spanning two worlds, he soon realizes things aren’t always what they seem. Will his calling as Keeper require a sacrifice he isn’t willing to make?

(My Review does have some spoilers).

This series has become quite fun. It is a world filled with time travel. In the first book, we meet who the head time traveler is, Master Archidus, but we only saw his world very briefly.

In this second installment of the saga, we see Chase Harper, our main character, and his girlfriend Ellie Williams travel not only through time on earth, but now in the world of Master Archidus. Granted, it takes a lot of tragedy and adventure to bring them to this new fantasy-like world.

The tragedies occur when Chase is sent to protect several other Keepers (those who hold the time travel devices called Counters), throughout this book. And when he returns to the 1900s to help build the transcontinental railroad so he can help pay for Ellie's medical bills from her stay in the hospital in the previous book. These two things are also the main actions of the story, so it ended up being a bit slow at parts.

And yet, I fell more in love with Chase this book. He is so honest and kind, while still being very protective. He gives his utmost respect to Ellie, and honestly, I love how much in love he is with Ellie. It's just soo...sweet. Plus, she's from the 1800s, so he makes sure he goes along with some of her customs when it comes to dating. There was a lot of character growth for him in this novel, which made up for the fact that nothing really happened until the last fourth of the book.

Anyways, I love the concept of this series. It is time travel, which is always cool, but there is also fantasy elements. The history in these stories is always fun and accurate. I love when authors bring history into their stories. This was a bit slower than the first book, but I do look forward to how Chase will handle what's happened in the next book. I'm also really excited to see more of what Master Archidus's world contains.