Queen of Shadows: A Review (Throne of Glass Series #4) 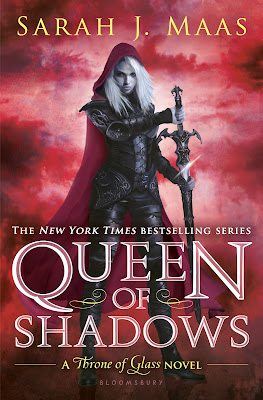 
(Also a winner of the 2015 Goodreads Choice Awards)

The queen has returned.

Everyone Celaena Sardothien loves has been taken from her. But she’s at last returned to the empire—for vengeance, to rescue her once-glorious kingdom, and to confront the shadows of her past…

She has embraced her identity as Aelin Galathynius, Queen of Terrasen. But before she can reclaim her throne, she must fight.

The fourth volume in the New York Times bestselling series continues Celaena’s epic journey and builds to a passionate, agonizing crescendo that might just shatter her world.
My Review:


(This contains spoilers for those who haven't read this series yet).

This book had so many twists and turns I wasn't expecting...There aren't even words for it!

Although I still must proclaim the third book in this series my favorite, this book was still  AMAZING.

Aelin is back and she is ready to fight. And fight she does. Holy moly I can't even say much without basically giving the WHOLE book away. But let me just say, Rowan comes back. And he is my favorite and he is ever as amazing as I thought he would be. We saw his more tender side here, and it just tugged my heart strings. Him and Aelin are so perfect for each other. They are able to build each other up from their horrid pasts. He also helps Aelin's really, really dark side fade away. I still shudder from a lot of things Aelin did in the second novel.

Choal. I sort of hated him for a while in the last book, but my love for him returned in this novel. He has given up for much and fought so hard. I love him and if he doesn't end of up with Nesrin, I might have fit.

Aedion... I love him! I liked how we got to know him more in this book and his past relationship with his cousin, Aelin. His loyalty is prime and his strength incredible. He's also kind, which is a very much needed quality in these lead characters. Needless to say, him and Lassandra would make an interesting couple, and I sort of hope it happens.

Lassandra...I like her now. Use to hate her, which if you've read this series, I'm sure you understand why. I like how we got to know the real her.

The witches, though. Mannon and her Thirteen. Wow. That's all I can really say. Needless to say, there was a huge plot twist with them I didn't see coming, and I really liked it.

I can say even less about the King of Adarlan....

Seriously, this series is awesome. It's full of intrigue and adventure and so many twists and turns. It's glorious. The character development is fantastic, and I learn to love and/or hate the characters the more I read. And characters are what grab me. I don't think I'll forget these guys anytime soon!