The Clockwork Three: A Review (Standalone) 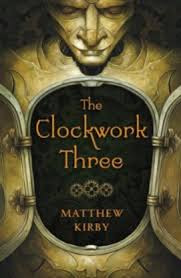 Three ordinary children are brought together by extraordinary events. . . .

Giuseppe is an orphaned street musician who sees no way to escape from his ruthless master, until the day he finds an enchanted violin.

Frederick is an apprentice clockmaker with a past he cannot remember, who secretly works to build the most magnificent clockwork man the world has ever seen.

Hannah is a maid in a grand hotel, whose life is one of endless drudgery, until she encounters a mystifying new guest and learns of a hidden treasure.

As mysterious circumstances bring them together, the lives of these three children soon interlock, and they realize that each one holds the key to the others’ puzzles. Together, the three discover they have phenomenal power when they team up as friends, and that they can overcome even the darkest of fears.

This was a beautiful book about three kids who are trying to discover who they are.

Giuseppie is an Italian boy who was taken from his home and forced to play music on American streets to supply Stephano with money. His life has been horrible, and it got even worse after he discovered the green violin.

Frederick is a clock-maker determined to become a journeyman no matter what the cost, even if that means seeking help from the one who has taken him in.

Hannah is only trying to keep her dearest father alive and healthy. She works hard each and every day to put food in her family's bellies and afford healthcare for her father.

These three kids, through incredible circumstances are brought together to help each other in their quests. Nothing goes the way they want, and things always got worse before they started getting better. They nearly lose everything, only to discover that together they are stronger and can overcome anything that's thrown their way. I love the friendship that is created between the three. They lived in a time where young children were sent to work and could nearly be slave labor. And yet, by their example, someone very unlikely helps them.

This was a great book about kids learning how to fight for what they want. Each of the three had to learn hard lessons, and they made pretty bad mistakes, but they grew. They learned and moved on, climbing the ladder to success. If there were to be a book about these three in the future, I know they would be teaching their own children about the trials they faced and how to do the right thing, even when doing the wrong thing is easier.