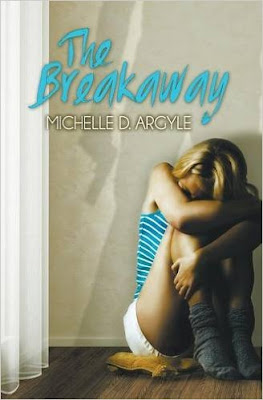 When Naomi Jensen is kidnapped, it takes her parents two days to realize she's missing. Escape isn't high on her list of priorities when all she has to return to is an abusive boyfriend and parents who never paid much attention to her. For the first time in her life she's part of a family-even if it is a family of criminals. But she's still a captive. In a desperate attempt to regain some control in her life, Naomi embarks on a dangerous plan to make one of her kidnappers think she's falling in love with him. The plan works too well, and when faced with the chance to escape, Naomi isn't sure she wants to take it

As you can see, this is another book about a kidnapping, and it's a kidnapping that includes Stockholm Syndrome. Which in and of itself is pretty scary and incredibly mind tripping. I had actually first heard this series when my mom, sister, and cousin were listening to it on audiobook on a fun road trip we took years back (I was reading my own book, but my interest had been peaked). Only now, however, have I actually read it.

So, our main character is Naomi Jensen. She is perhaps the biggest idiot I've ever read about. I kept thinking she would be smarter, but no. She failed, just about every time. Still, I was enraptured about the dynamics of her relationship with her captors. That's what kept me reading.

Naomi doesn't know how to have a functional relationship. She had an abusive boy friend before, who I very much hated, and parents who didn't know how to be parents. Essentially, Naomi was never taught what love really was or how to find someone who actually loved her, and didn't use her for her body or for her parents' connections. Which, I think just made her so incredibly naive that when she got kidnapped, she didn't have the capability to think like a normal human being.

Because I would have tried to escape so many times.

She only tried once.

I won't give too much away, but needless to say, I obviously don't understand how Stockholm Syndrome works very much. I can't comprehend how you can come to love someone who is keeping you locked in a house, away from everything that you have known and loved. Which I believe is another reason why I kept reading. I just had to know how this was all going to work out.

One of her kidnappers, Jesse, is made out to be such a great guy, but how can you be a great guy when you could have saved a girl a year earlier, and only did so now because it benefited you? Just...crazy stuff that actually happens that I can't even imagine (and am incredibly grateful that it hasn't happened to me).

The ending was happy for me, but not so much for Naomi, which once again, weirded me out. There's a second book, of which I am excited for. Yes, Naomi is pretty stupid, but I can't stop reading the effects of her capture. It's such a train wreck, but it's fabulous and terrifying.

Argyle is a beautiful writer, and I enjoyed her writing style. It's another reason why I kept reading. She dives so well into Naomi's naive-ness and her strange way of thinking, that I'm completely drawn in. Sure, I can't connect with Naomi's airheaded-ness, but her story is interesting and Argyle keeps on surprising me.