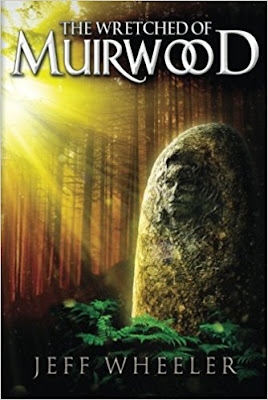 In the ancient and mystical land of Muirwood, Lia has known only a life of servitude. Labeled a “wretched,” an outcast unwanted and unworthy of respect, Lia is forbidden to realize her dream to read or write.

All but doomed, her days are spent toiling away as a kitchen slave under the charge of the Aldermaston, the Abbey’s watchful overseer. But when an injured squire named Colvin is abandoned at the kitchen’s doorstep, an opportunity arises.

The nefarious Sheriff Almaguer soon starts a manhunt for Colvin, and Lia conspires to hide Colvin and change her fate. In the midst of a land torn by a treacherous war between a ruthless king and a rebel army, Lia finds herself on an ominous journey that will push her to wonder if her own hidden magic is enough to set things right.

At once captivating, mysterious, and magic-infused, The Wretched of Muirwood takes the classic fantasy adventure and paints it with a story instantly epic, and yet, all its own.

This fantasy adventure was such a wonderful breath of fresh air. Not only did Lia and Colven’s story keep me up late at night, but it was so clean. There wasn't any language or dirty scenes. It has been a while since I've read such a good, wholesome book. Jeff Wheeler reminded me how you can write a good story without foul words or dirty sex scenes.

Now, for this story, Lia is about 13 years old and Colven about 17. So I appreciate that even though Lia had a crush on Colven, nothing happened beyond friendship. Because she's 13!

What I also loved was the world building. I walked beside Lia and her friends, I was there in battle with them, there when she discovered how to have more control over the medium, and there through her pain of being a wretched.

Lia is so good. Despite the lot she's been given in life, she loves with her whole heart and always strives to do what's right.

I also love the Aldermaston. Although I hated him at first, I learned just how an amazing mentor he is.