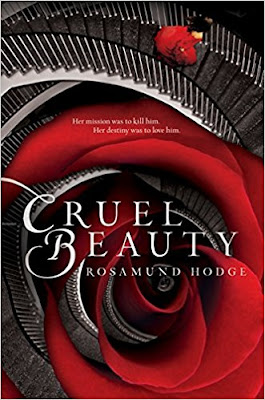 Graceling meets Beauty and the Beast in this sweeping fantasy about one girl's journey to fulfill her destiny and the monster who gets in her way-by stealing her heart.

Based on the classic fairy tale Beauty and the Beast, Cruel Beauty is a dazzling love story about our deepest desires and their power to change our destiny.

Since birth, Nyx has been betrothed to the evil ruler of her kingdom-all because of a foolish bargain struck by her father. And since birth, she has been in training to kill him.

With no choice but to fulfill her duty, Nyx resents her family for never trying to save her and hates herself for wanting to escape her fate. Still, on her seventeenth birthday, Nyx abandons everything she's ever known to marry the all-powerful, immortal Ignifex. Her plan? Seduce him, destroy his enchanted castle, and break the nine-hundred-year-old curse he put on her people.

But Ignifex is not at all what Nyx expected. The strangely charming lord beguiles her, and his castle—a shifting maze of magical rooms—enthralls her.

As Nyx searches for a way to free her homeland by uncovering Ignifex's secrets, she finds herself unwillingly drawn to him. Even if she could bring herself to love her sworn enemy, how can she refuse her duty to kill him? With time running out, Nyx must decide what is more important: the future of her kingdom, or the man she was never supposed to love.

This was a very interesting take on Beauty and the Beast. It was set in the real world, on an island that had been cut off from the real world. It was fascinating to have Greek Mythology tagged to the story, along with their rituals.

I'm not sure I liked this book as much as the hype did. Nyx was selfish and cruel, as was the beast. Two awful people meant for each other.

It does make sense, as to why the book is called Cruel Beauty, but... Nyx was so mixed on her emotions, where at one point she was nice, and then she was awful. She was an unreliable narrator, and it drove me crazy at points. I liked the beast more than I liked her, because at least he stayed true to his character, whereas Nyx was just a mess.

Her whole goal was to save the millions of people who had been trapped, but she started whining and complaining about how it was too hard, and why did it have to be me? Blah, blah, blah. Like, obviously your life sucks. Get over it. Are you really going to let your petty teenager wants destroy the rest everything you know? Gosh. Ignifex was a far better person than Nyx will ever be.

The story had great potential, but I felt it could have been executed better. I only finished it because my friends insisted it was a FANTASTIC book...

I mean, the cover is beautiful. I will give her next book a try, but I don't have high hopes.