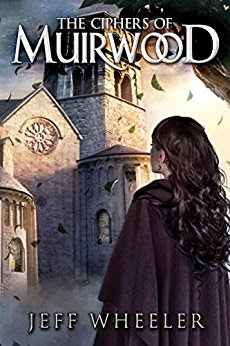 From the moment she was banished by her father, the king, Princess Maia journeyed to seek sanctuary at Muirwood Abbey, the epicenter of magic and good in the land. Now safe for the first time since her cruel abandonment, Maia must foster uneasy friendships with other girls training to be Ciphers: women who learn to read and engrave tomes of ancient power, despite the laws forbidding them to do so.

As Maia tries to judge whom to trust, she makes a shocking discovery: her destiny is to open the Apse Veil and release trapped spirits from her world. Then she learns that her father is coming to Muirwood Abbey to celebrate the Whitsunday festival—and Maia’s estranged husband, whom she was forced to abandon, will join him. Torn between deadly political machinations and unstoppable spiritual forces, Maia must channel unknown powers within herself to save her friends, the abbey, and the entire kingdom of Muirwood.

Maia is one of the best female leads I have read about in a long time. She has been through the absolute worst. Having been forced to marry, then abandon her husband, and travel a dangerous path to Muirwood Abby.

The Abby isn't the same as it once was in the original series. It is still being built (against the law) from the destruction that occurred so many years before. Yet, the power is still there. The Medium is strong, and the Aldermaston is just as strong as our original Aldermaston friend.

Maia has made some great friends, and continues to do so among the Ciphers, despite some of them being stupid mean girls. She is kind, she is compassionate, even though hardly anyone has treated her similarly.

The danger increases when Maia learns her father is to come to Muirwood. Her father, who is now threatening to name her a bastard and cut her off from her title as Princess. How will she face the father she still loves, yet hates her so much? To the point of wanting her dead.

This was another wonderful addition to the Muirwood series. I loved the original series, but following Maia has brought this incredible world back to life in ways the first series couldn't accomplish. I could revisit these books and never grow tired of the world.