A Fine Gentleman: A Review (The Jonquil Brothers #4) 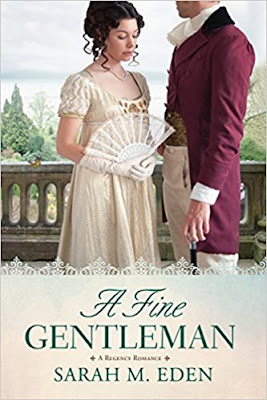 London barrister Jason Jonquil has spent his entire life working to establish his identity as a gentleman, a man of refinement like his father and brothers. But when fiery Spanish beauty Mariposa Thornton walks into his office, he finds himself losing his grasp on his dignified character. The woman is infuriating, pushing him to the limit of his legendary patience. However, her case seems simple enough—a small matter of inheritance. Or so he believes.

Once a well-born lady, Mariposa fought to survive the brutalities of Napoleon’s war on Spain. She braved horrific perils and undertook dangerous missions on behalf of those fighting against the invading French army. But her greatest battle still lies ahead: after being separated from her family, Mariposa sets in motion a plan to reunite with her loved ones in England. To avoid drawing the attention of the French, Mariposa dons a carefully crafted persona to conceal her true purpose. As Jason and Mariposa are drawn together by the case, they come to know the people beneath the masks they both wear.

When the truth of Mariposa’s quest is revealed, the couple is pulled into a mystery that will test the limits of their courage—and expose the true desire of their hearts.
My Review:

Yay! Another amazing book from Sarah M. Eden. Seriously, I love her books more than anything. Despite all her books being in the same time period, she manages to create vastly diverse and lovable characters. I admire how she does it. There's a reason why I only read Regency Romance, not write it.

Jason Jonquil is just as fine a gentleman as his brothers, but he hides behind a thick mask. A mask where he's all business, and has no emotion. (The reason behind this hurts my heart, but makes me love Jason all the more).

Mariposa Thornton is a victim of the Napoleonic war. She has survived horrible conditions, and has been separated from her family.

In the most oddest of ways, Mariposa and Jason become closely acquainted on the search for her family. They tease and joke with each other, although they sometimes cross the line. They are an interesting couple, and have a unique way of communicating with each other.

I love how in the end, they stayed with each other, even if they originally thought it wasn't the best idea. They resolved most of their differences and found a way to get along.

This was such a cute story. One where we not only enjoyed a love story, but were reminded of the horrors of Napoleon's reign.