The False Prince: A Review 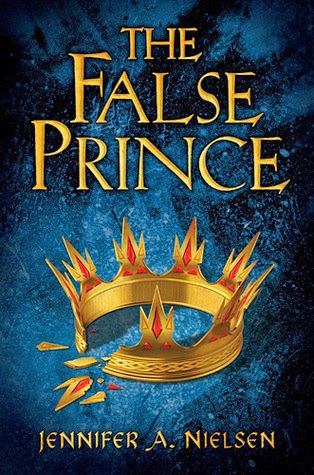 THE FALSE PRINCE is the thrilling first book in a brand-new trilogy filled with danger and deceit and hidden identities that will have readers rushing breathlessly to the end.

In a discontent kingdom, civil war is brewing. To unify the divided people, Conner, a nobleman of the court, devises a cunning plan to find an impersonator of the king's long-lost son and install him as a puppet prince. Four orphans are recruited to compete for the role, including a defiant boy named Sage. Sage knows that Conner's motives are more than questionable, yet his life balances on a sword's point -- he must be chosen to play the prince or he will certainly be killed. But Sage's rivals have their own agendas as well.

As Sage moves from a rundown orphanage to Conner's sumptuous palace, layer upon layer of treachery and deceit unfold, until finally, a truth is revealed that, in the end, may very well prove more dangerous than all of the lies taken together.

An extraordinary adventure filled with danger and action, lies and deadly truths that will have readers clinging to the edge of their seats.

Let me start out by saying...

OH MY GOSH THIS BOOK WAS SO FLIPPING FANTASTIC I CAN'T EVEN HOLD IT IN!

So I was recently in a reading slump where nothing I read was really catching my attention and then I picked up this book and was sucked right back into my love of reading.

This book follows the trail of an orphan named Sage. He is arrogant, foolish, and sometimes just plain annoying. But underneath that all, he is the most clever protagonist I have ever met. He is around the age of fifteen and man is he good at what he does.

He steals and hides things like there's no tomorrow and if he truly does not want to be caught, then he won't be. His secrets will remain secrets until he wants them known.

What I love about Sage is his devotion. Now, if you have read this book you may question my choice of words. Devotion? To what?

Let me tell you.

He is devoted to the people of Carthya whether he fully realizes it or not. He is always fighting for what's right, even when the things he does aren't always orthodox. Sage is a clever, clever boy and what he wants will happen. He always bends things around to a way that suits him. That's not to say he isn't hurt during the process, quite the contrary. But the fact that he is willing to endure the pain and sometimes even torture for the right thing shows just how honorable of a person Sage really is.

The adventure in this book is gripping. Jennifer A. Nielsen never lets you see what's coming so when something new happened, I was like "NO WAY!"

This book also had the biggest plot twist I have read in AGES and even had several more surprises after that. I was so stunned and amazed with Nielsen's writing that I read as fast as I could to the end. I haven't had a lot of time for reading lately, but I made sure that I got to read this book as much as possible. It is so fantastic!

I haven't read a book without romance and only adventure in a long time, and I am grateful for this book. It has refreshed me significantly, and now I am eagerly reading the second installment, The Runaway King, which in fact won a Whitney Award!

The False Prince was a beautifully written, adventurous, upper middle grade. And yes, even though it is aimed for younger readers, I absolutely fell in love with the story. Middle grade after all is the reason why I began writing myself. I admire all writers, but middle grade authors especially.

Thank you for inspiring me to write and follow my dreams.

I give The False Prince a ginormous FIVE OUT OF FIVE!!