Dragon Rising is Asher's story and takes place during the first third of Eden's Root, which is the first book in the Eden's Root Trilogy. If you missed any of the tour, go back and check out the reviews and excerpts! Kelly P's Blog - Excerpt
There was a creak and Asher straightened, clicking off the keychain, the sickly blue LED glow vanishing. He waited in the darkness, his back pressed to the wall of the supply closet. His free hand tightened around the hilt of his sword.

Coffee, Books, & Art - Excerpt
Since everyone fled fearing nukes, the City was largely abandoned, the towers and subways now skeletons and blood vessels in a dead body, a corpse left to rot in the summer sun. At times he imagined walking out to the center of one of the Avenues and standing there alone, certain that he was the last man on Earth.

Buried Under Books - Review
"This is a novella that gives us the backstory of one character and it would be easy to mistake it as a prequel even though it’s labeled as #4; it is not a prequel in the usual sense and should be read after the first three books or, at the least, after Eden’s Root. Then you’ll just be adding to the pleasure you’ve already gotten"

Hope to Read - Excerpt
When I first moved here last fall I never admitted that I was nervous. It’s not like I’d ever really left Chicago. But that first night, when sirens floated up from the streets I slept with a smile on my face. It felt like home.

Fundinmental & sherryfundin - Review
"This is a horror story that has no supernatural monsters, just the humankind.

I am blown away by this series and find it hard to put into words how frightening it is....

Rachel’s writing gave me a first hand experience into what could be our future.

The Eden’s Root Trilogy has stuck with me long after I finished reading."

Colorimetry - Review & Excerpt
"I love this novella. !! It's dark and harsh and gritty... and I felt Asher's hunger and what he was willing to do to find food, making this dystopian reality so real, it hurts."

I’ve decided to stop keeping a body count after today. All 11 additions are from one site, a grocery store on 93rd. Someone trapped the family inside - easy enough with steel plates over the doors.

My Life, Loves and Passion - Review
"I thought this story was good. I was a little confused since I hadn't read anything else but loved what I read. The story is written well and keeps you intrigued."

Pieces of Whimsy - Excerpt
I’m doing better at getting sleep now, whether that’s from exhaustion or adaptation, I don’t know. Either way, I’ve managed to avoid the gangs so far. I’m alive and that’s all that matters. If I can keep it together…if I can survive this first wave of death, someone will get things back up and running, right? There’ll be radio or an Army convoy, or something. There has to be.

Letters From Annie (Douglass) Lima - Excerpt
Anyway. I was robbed last night while I slept. I guess I should be grateful that I’m still alive. (And I’m not being tortured. Bonus.) And I’m grateful that they didn’t see my sword and take it.

Brooke Blogs - Excerpt
The wheeze of his breath rang in his ears, but he tilted his head, listening for his followers. Rivulets of rain splattered through the shattered windows, last vestiges of the thunderstorm that had ravaged the City. But nothing else…

The Written Adventure - Excerpt
Asher awoke to a scream and sat straight up, nearly braining himself on the pipes above. Ducking just in time, he swiveled, seeking the source of the sound.

“No, please! You can have me, just let Cassie go!” 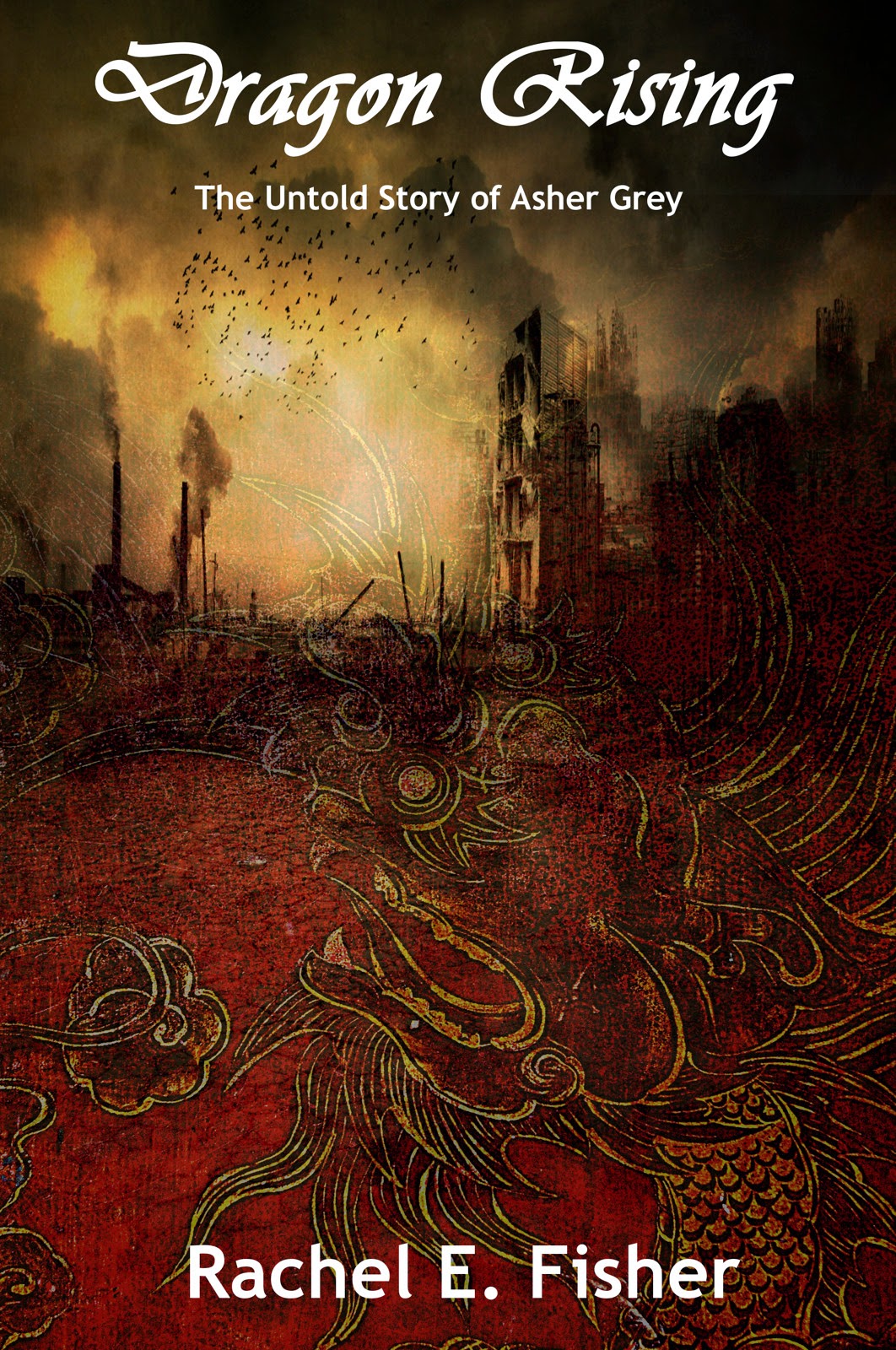 In his freshman year at Columbia University, future journalist Asher Grey is forced to face his darkest demons when the world falls to pieces. A champion Tai Chi swordsman, he will be tested to his limits just to survive. With a heavy heart and swift hand, he must reach deep inside himself to discover what it means to be a Dragon.

"Fisher doesn’t hold back. She never has. That’s what makes the ‘Eden’s Root’ series great." - Blakely from Indiscriminate Writes

"This dystopian novel drew me in from the start with it’s believable story of how a world changed by just having a few changes done to food we grow." - Sarah from Howling Books and Design

"No one is safe in this book. Everyone suffers something, and since I love these characters as my own friends, it's hard." - Rebecca from tHe crooKed WorD

"This story is just so intense, it drags the emotion from you whether you like it or not!" - from MySeryniti

It is 2033, and the world hovers on the edge of explosion as unexplained crop deaths lead to severe global food shortages. In the United States, the Sickness is taking lives slowly, creeping its way into every family. Fi Kelly has already faced the Sickness in her own family, toughening her beyond her years. But a shocking confession from her dying father will push her toughness to its absolute limits. Saddled with an impossible secret and the mission of saving her little sister, Fi sets out to transform herself into the warrior that she must become to survive the coming collapse. Along the way, she will discover that evil can be accidental and that love can be intentional.

The mission of Eden must be fulfilled and Eden’s best Seekers are needed. Forming a new group they dub the Seeders, Fi, Asher, and Sean are joined by a new addition as they set out to bring hope and support to the Topsiders in the form of radios and heirloom seeds. Their experiences Topside prepare them for the threat from marauding gangs they call Lobos, but it is a different, less obvious sort of threat that takes them by surprise. As radio broadcasts begin to reconnect Eden and the Topsiders, the Seeders stumble upon mysterious broadcasts from unknown stations. When two of their own new radio stations go silent within days of each other, Fi and her companions realize that something is terribly wrong. Eden finds itself pitted against a growing and unknown force as their very mission lights the flames of war.

"I promise you, Sean. We're going to stop them."

The pieces on the board are in motion and with both sides gathering strength, each move will be critical. When the Truthers make a play for checkmate, the Seeders are forced to respond. Fi and her companions will face greater challenges and higher stakes than ever before, because this time if they fail, it's for keeps.


I am a wife and entrepreneur living and working in Florida. I am also a graduate of Mount Holyoke College, where I majored in Biology. It was always my assumption that I would end up making research my life. Though it did not work out that way in the end, my passion for Biology remains intact.

I have always loved biology-based science-fiction and the young adult genre. It is in this vein that I offer my work.


$20 Amazon Gift Card and an ebook of Dragon Rising