For Elise: A Review 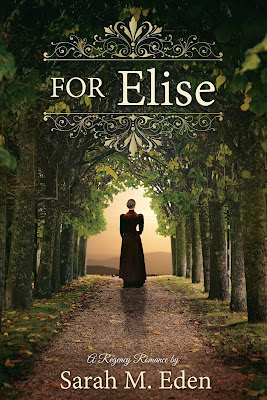 They were inseparable in their youth, the very best of friends, two halves of a whole. For four years, Miles Linwood, the Marquess of Grenton, has felt incomplete without her. When a carriage breakdown leaves him temporarily stranded in a tiny town, Miles makes an unexpected discovery that will alter the course of his life, and rewrite the pages of his past.


Let me just say, Sarah Eden strikes again! This was a wonderful book!

Miles and Elise's story was so heart wrenching and breaking and just fantastic.

Elise has been missing for four years and Miles has been torn up about it ever since. It's not until he's stopped in a poor part of town that he rediscovers his dear friend Elise.

Only, she is not what she once was. Elise has dealt with a hard and terrifying past four years. Her entire life changed from being a properly raised, elite women, to poverty stricken and basically living in fear.

Miles is distraught at the change in his friend, but does everything he can to make sure that she is taken care of and safe. Only, Elise is still hesitant. She accepts and goes along with Miles's whims, but gah! She got so frustrating at times (which, as certain things are revealed, makes sense, but still!). Miles did just about everything for her, and she still would not open to him. It was quite sad to see the heartbreak in Miles.

Although, very funnily (at least to me) Miles for the life of him, would not realize that the way he thought about Elise was not that of his childhood friend, but as the woman he was in love with. It made for some humerus moments, particularly when his brother-in-law makes fun of him.

Eventually, while solving a murder mystery, they finally accept their feelings for each other! I love historical fiction and the journey the two take to find their love for each other, but it does get so frustrating at times, but then it ends up happy and makes me smile.

I can't say a lot about this one without revealing anything, just that it's fantastic and if you like this genre you need to read it.