The Statistical Probability of Love at First Sight: A Review 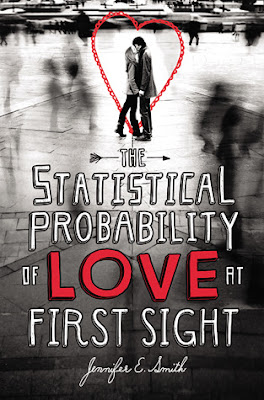 Four minutes changes everything. Hadley Sullivan 17 misses her flight at JFK airport, is late to her father's second wedding in London with never-met stepmother. Hadley meets the perfect boy. Oliver is British, sits in her row. A long night on the plane passes in a blink, but the two lose track in arrival chaos. Can fate bring them together again?

This was recommended to me by a cousin of mine. Needless to say, had she not given it too me, I probably wouldn't have read it. This book is a 24-hour romance novel. And the reason why I wouldn't have picked it up on my own is because I don't like insta-love. BUT! This book was actually quite good.

You know when you have your day planned out perfectly and you want everything to stay perfect, but then so much other crap happens that you are astonished it all happened in one day?

Basically what this book was.

American teenage girl Hadley meets super hottie British guy Oliver in the airport. Hadley is on her way to her father's wedding with the woman he cheated on her mother with. She's none to excited to meet the woman she's sworn to hate, or her father who she's avoided for over a year. So when Oliver shows up all gallant and kind, she realizes just how alone she's been feeling.

Of course, they barely know each other, so their a bit awkward at first, but Oliver is good at breaking the ice. He's kind and funny, and knows how to keep the conversation flowing.

When they get on the plane, they spend the seven hours talking and sleeping (both of which happen to lay their heads on one another, hehe). Oliver doesn't make small talk, and they begin speaking about their fathers. This is a sensitive subject for them both, but they make it through. They both seem to be relieved to get their thoughts of their chests too.

So when they land, it was kind of sad to see them part. I will admit that.

As the story goes on, Hadley realizes a few things about herself, her dad, and her soon-to-be stepmother. What I love is that she is obviously going through a lot, but she's finally willing to hear what her dad has to say. It touched my heart that she found a way to forgive him, and even learn to like her stepmom. And something that Oliver sad on the plane (I believe, anyways) pushed her to do it. Oliver's father has also cheated on his mom, but was too cowardly to admit what he did. Oliver said something along the lines of, "At least your father had the guts to move away instead of staying and hiding the truth." That's not word for word, but it was a very profound sentence. And that's why I believe that even through the pain Hadley went through, she was able to forgive and really love her dad again. I was very sweet.

Of course, Oliver shows up again, and the pain of what they both had gone through brings them ever closer together. This all happens in only 24 hours, so there's nothing shockingly profound about their relationship, just that it bloomed when it wasn't expected and turned into something possible.

The whole book was very cute as well as relateable and eye opening. Anything can happen. And it always happens when you least expect it.