The Summoning: A Review (Darkest Powers #1) 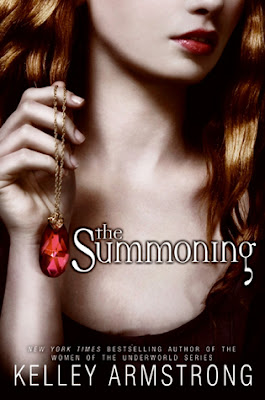 My name is Chloe Saunders and my life will never be the same again.

All I wanted was to make friends, meet boys, and keep on being ordinary. I don't even know what that means anymore. It all started on the day that I saw my first ghost - and the ghost saw me.

Now there are ghosts everywhere and they won't leave me alone. To top it all off, I somehow got myself locked up in Lyle House, a "special home" for troubled teens. Yet the home isn't what it seems. Don't tell anyone, but I think there might be more to my housemates than meets the eye. The question is, whose side are they on? It's up to me to figure out the dangerous secrets behind Lyle House... before its skeletons come back to haunt me.

Chloe Saunders was quite a fun character to follow around. Although she was set financially, and was not wanting there, she had a pretty hard life. She didn't exactly have loads of friends and then she started seeing ghosts.

Which led her to Lyle House and lots of other kids who supposedly had loads of problems too. At first things seem to be going as well as they could for Chloe, but then we begin to see that Lyle House isn't what we thought it was.

This was a fun YA filled with surprises around every corner and a fantastically sarcastic MC. Chloe doesn't take any crap from anyone and fights for what she wants. At times she is a bit clueless, but overall, I really liked her.

As for all the other characters, it was fun to see Chloe interact with them and learn about being a Necromancer. It was fun to discover this new world of supernatural powers.