Pieces: A Review (The Breakaway #2) 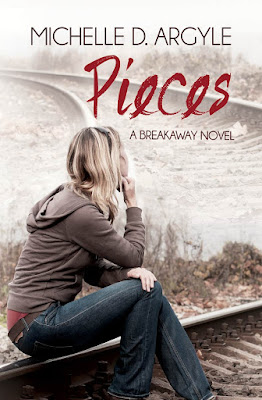 Two years after watching her kidnappers go to prison, Naomi Jensen is still in love with one of them. Jesse will be released in a few years, and Naomi knows college is the perfect distraction while she waits. But when her new friend Finn makes her question what is right and what is wrong, she begins to wonder if Jesse is the one for her...until she discovers he's out on parole. Naomi must sort through her confusion to figure out where love and freedom truly lie-in Finn, who has no connections to her past, or Jesse, who has just asked her to run away with him.

Pieces is a companion to The Breakaway and can be read independently, if desired.

So, I did review the first book of this, The Breakaway, and I don't have much more to say about it than what I have already said.

Naomi is a FREAKING IDIOT. She is so incredibly weak-minded and frankly just dumb. Like, why would you ever move to Italy with a man who kidnapped you! Who obviously is still involved with sketchy stuffs. Insert eye roll here.

Jesse is also an idiot. He could have had a clean slate but he was impatient and stupid.

My friends can attest to my yelling out loud at these stupid characters. And yet, just like with the first one, I was so drawn in by their stupidity! That, and Michelle D. Argyle is a wonderful writer. Her ability to draw me in was great. Despite these characters being dumb...well, it's just who they are and why the situation happened in the first place.

So, even though I kind of hated Naomi and Jesse, I did like the secondary characters. They were pretty good.

The only redeeming quality about Naomi is that she smartens up at the end and does the right thing. About freaking time, right? Yeah, I thought so too.

I honestly did enjoy reading these books. It was a train wreck about a stupid, weak-minded girl, but it was a great read.