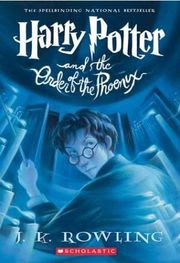 Description (Goodreads):
Harry Potter is due to start his fifth year at Hogwarts School of Witchcraft and Wizardry. His best friends Ron and Hermione have been very secretive all summer and he is desperate to get back to school and find out what has been going on. However, what Harry discovers is far more devastating than he could ever have expected...

Suspense, secrets and thrilling action from the pen of J.K. Rowling ensure an electrifying adventure that is impossible to put down.

Once again, it was wonderful to visit the world of Harry Potter. As I re-listen to this series again, I learn more about the characters and the magical world of witches and wizards. I don't think I will ever grow old of Harry Potter and his many friends.

I really love this book because of how the Dumbledore's Army is started. It was such a wonderful way for the students to unite together...and not only that, but they were able to help students who weren't as advanced in Defense Against the Dark Arts become better.

It's just super unfortunate that Dumbledore's Army was started because of stupid Umbridge. I can't stand that women. She just needs to not be a witch anymore...

And, can I say I'm glad Harry got over Cho. The movies don't show how annoying she actually is. All she does is cry. Granted, yes, she lost the love of her life, but she should not have played with Harry's heart. Gah. I'm glad Harry saw how awesome Ginny is, and dropped the crying Cho.

This book was very powerful as we learn that Voldemort can get into Harry's head. The emotional trauma Harry goes through as he deals with the murder of his parents in his head, but... Harry sees this as an advantage and uses his connection with Voldemort despite everyone telling him to stop. Sure, it was dangerous and incredibly risky, but! I think I would have done the same thing if I was Harry.

Harry Potter is one of my favorite series ever. It is definitely worth reading, especially if you love magic... (And who doesn't love magic?)