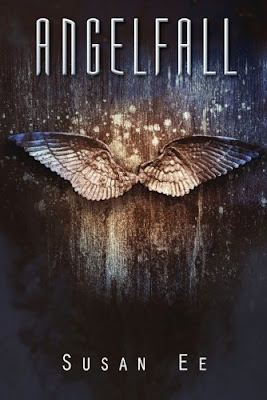 It's been six weeks since angels of the apocalypse descended to demolish the modern world. Street gangs rule the day while fear and superstition rule the night. When warrior angels fly away with a helpless little girl, her seventeen-year-old sister Penryn will do anything to get her back.

Anything, including making a deal with an enemy angel.

Raffe is a warrior who lies broken and wingless on the street. After eons of fighting his own battles, he finds himself being rescued from a desperate situation by a half-starved teenage girl.

Traveling through a dark and twisted Northern California, they have only each other to rely on for survival. Together, they journey toward the angels' stronghold in San Francisco where she'll risk everything to rescue her sister and he'll put himself at the mercy of his greatest enemies for the chance to be made whole again.


I fell in love with this book quite quickly.

Penryn is one of the coolest female protagonists I have ever read about. She knows her way around a fight and the post apocalyptic world. Which happened to have been caused by none other than ANGELS!

Angels! Already I loved the idea.

And then I started reading and fell in love with the story.

The story starts out with Penryn's younger sister (Paige) gets kidnapped by angels. Her younger sister can't walk and is literally taken out of her wheelchair by the angels. Tears were already running down my face. Not to mention that Penryn's mother is a crazy person. Like, legit crazy. So now Penryn had to figure out how to not only survive, but find her lost sister.

Oh, and get an angel, who had just been de-winged, to help her.

*Dreamy Eyes* Of Raffe. The fallen angel of whom I loved from the minute he came into play. Thankfully, there wasn't an insta-love (they didn't even really get together at all in this book, but it will happen...it must!). Anyways, Raffe is all masculinity and muscle. Yet, despite his hard exterior, there's something akin to a heart underneath. Despite his being "captured" by Penryn (because he was totally being held hostage *shaking head*), he helped her along the way.

Street gangs and angels and little factions of people staying together start to get in Penryn's and Raffe's way, until they find a camp that may or may not just help them more than they think.

Man... This was a really good book. I highly recommend it. I also appreciated how clean it was, especially since it was a post-apocalyptic book.