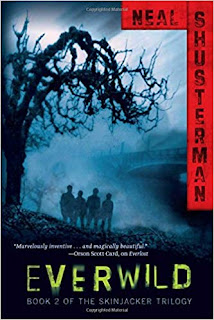 Everlost, the limbo land of dead children, is at war. Nick the “Chocolate Ogre” wants to help the children of Everlost reach the light at the end of the tunnel. Mary Hightower, self-proclaimed queen of lost children and dangerous fanatic, is determined to keep Everlost’s children trapped within its limbo for all eternity. Traveling in the memory of the Hindenburg, Mary is spreading her propaganda and attracting Afterlights to her cause at a frightening speed.

Meanwhile, Allie the Outcast travels home to seek out her parents, along with Mikey, who was once the terrifying monster the McGill. Allie is tempted by the seductive thrill of skinjacking the living until she discovers the shocking truth about skinjackers.

My Review:
What a wild end to the first book right?

Well, here we are with our characters again. Nick may look terrifying, but he really does have a heart of gold. All he wants is for kids to go home...wherever that may be. He knows the light is good because it is the only time anyone looks at peace right before they go. He desperately wants this for himself, but he knows he needs to convince all those under Mary and other's influences that the light is not evil.

Allie and Mikey travel to find her parents. They are met with another group of Skinjackers who aren't exactly the nice type. They Skinjack for fun and without consequence, leaving poor Mikey behind in the world of limbo as they bounce about everyone's bodies. Poor Mikey just wants someone to love and respect him for the power and person he is. Allie, unfortunately, stays blind to this until far too close to the end...but I guess that really is good storytelling. I couldn't put the book down!

Mary drove me insane. The way she thinks is just wrong! Of course, it's right in her head, but really it's just wrong. She doesn't want to lose control over all she's built, and yet Nick and Allie are making her limbo and actual hell. The lengths she goes to in order to stop those two is disgusting.

I will have to say, the ending to this installment made me anxious to read the next. Neal Shusterman does well with leaving us with a cliff-hanger but not in a suddenly cut-off way but in a way that gets you pumped for the next book not dying for it...for lack of a better description. Once again, another great book from Shusterman who does well at keeping it clean and still telling a riveting story.