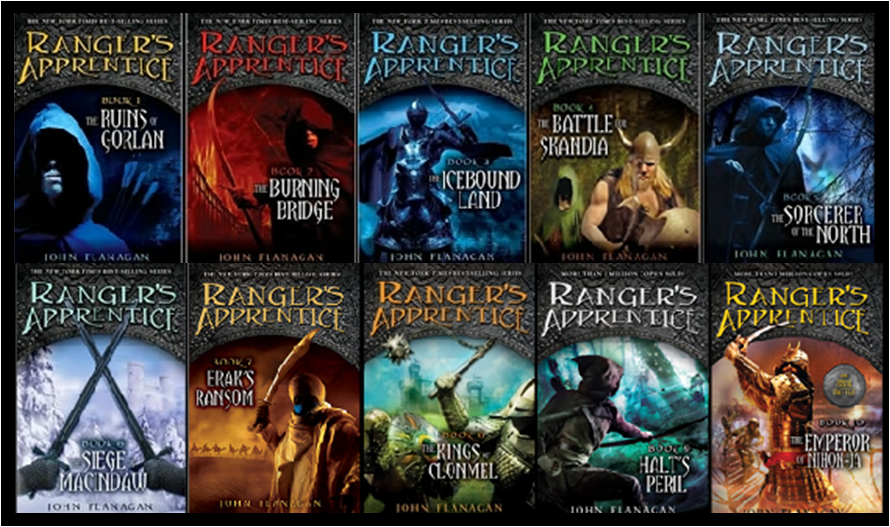 Can I just begin by saying this series has become one of my all time favorites?

I have recently finished the tenth book of Ranger's Apprentice by John A. Flanagan. Truly this series has kept up the adventure, anticipation, fun, and humor. Flanagan has created a beautiful world filled with fantastic characters. I love the allusions he makes to the world we live in--it is always exciting to make the connections!

And may I applaud his characters!!

Will Treaty. I love him. I love everything about him. Through these ten books he has grown so much and has become the epitome of a genuine, fantastic lead character. He has learned by trial and error as we all do, and Flanagan put Will through such real life problems that the reader can connect with him. Not only that, but you can tell that he has such a good heart. He always fights for the good side, no matter how hard things get. He never backs down. He is determined and a great example of hard work. Will never gives anything his second best. No, he gives it his all! Will is intelligent, witty, and hilariously clueless when it comes to women. Needless to say, if he were real, I would have to fight Alyss for him.

Alyss Mainwaring is pretty cool too. I appreciate that Flanagan made her strong and able, but still feminine. Alyss is crazy smart and perfect for Will. She is funny, but practical. Alyss has many of the qualms women have about life, though. I think that's another reason why I like her so much. Being a girl isn't an easy thing, especially in her world where men usually do the hard pulling. Flanagan brought out Alyss's strength in ways that readers could follow, even if the situations are slightly different.

Horace Altman. I also love him. He is like a giant, adorable teddy bear. One thing I super like about him is his willingness to accept his weaknesses. He has to endure company with Halt and Will on many adventures and their "unique" way of perception. Horace knows were his limitations are, and he is not the fool to pretend that he knows something he does not. Which is way I am glad that he admitted in this book, out loud, that he was grateful for Will's and Halt's strategic abilities. He is strong and capable, a firm rock to latch onto when things go a bit haywire.

Princess Cassandra aka Evalynn. Honestly, it took me a while to like her. BUT! In the end she proved to be as strong as Alyss, just in her own individual way. I know that when she becomes Queen, she will be a wonderful one. She is caring, spunky, and just a little bratty. But hey, it comes with being a princess, right?

Now... HALT. During Halt's Peril, where I thought he was going to die, I was about to put down this series and declare that I would never finish it. Halt is my all time favorite. I love him more than Will and Horace combined. He is silently hilarious, wise, compassionate, and all together the best grumpy "old man" that has ever been in literature. He is the perfect father figure for Will and all the other wards. I am so grateful that he and Pauline finally got over their stubbornness and got together. My Halt needed a woman in his life, and Pauline is perfect for him. I love how even though Halt makes himself out to be mysterious and foreboding, he is actually funny and kind. I like how he never lets Will--or anyone, for that matter--back down or give up. He pushes people to thier limits. He leads them to their full potential while always being there to help, guide, and give advice without giving them all the answers or babying them. I do not know where he will be in the twelfth book, but I really hope he stays in the books--but he is an old man... Sniff, sniff. I am breaking out in nerves from the anticipation.

As you can see, I have become very attached to this series. I want to thank John A. Flanagan for continuing the series. I had like, a MAJOR FREAK OUT when I discovered there was a twelfth book. Which made my freak out at the end of this one a happy freak out.

I can't express how much I love this series. I have been reading it for the past few years now and have recommended it to who knows how many people. I have asked those who do not enjoy reading what books they happened to like, and Ranger's Apprentice is the top one! This series may be long, but it NEVER gets boring. EVER. 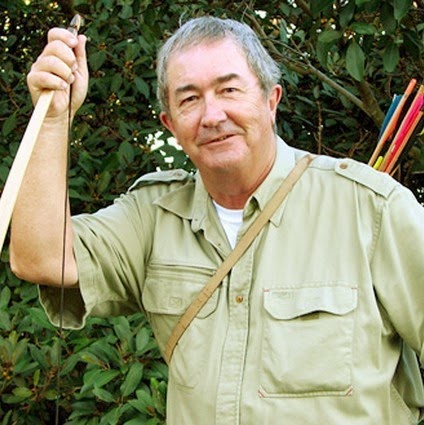 This series out of a whole deserves a FIVE OUT OF FIVE!! (More like a fifty billion out of five, but that's just me...)

Needless to say, this tenth book was so fantastic that I had to share with the world wide web of how much I love this series.

John A. Flanagan. You are a FABULOUS writer. Thank you for this amazing adventure with Will Treaty!
Posted by Unknown at 7:00 AM