The Magician: A Review 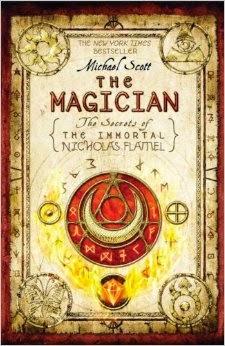 California:
In the hands of Dr. John Dee and the Dark Elders, the book of Abraham the Mage could mean the destruction of the world as we know it. The most powerful book of all time, it holds the secret of eternal life — a secret more dangerous than any one man should ever possess. And Dee is two pages away from the knowledge that would bring the Dark Elders into ultimate power.

His only obstacle? Josh and Sophie Newman — who are eight thousand miles away.

Paris:
After fleeing Ojai, Nicholas, Sophie, Josh, and Scatty emerge in Paris. The City of Lights. Home to Nicholas Flamel. Only, this homecoming is anything but sweet.

Niccolo Machiavelli, immortal author and celebrated art collector, is working for Dee. He's in hot pursuit, and time is running out for Nicholas and Perenelle. Every day they spend without the book, they age one year: their magic becomes weaker and their bodies more frail. For Flamel, the Prophecy is growing clearer and clearer. It's time for Sophie to learn the second elemental magic.

And there's only one man who can teach it to her: Flamel's old student the Comte de Saint-Germain - alchemist, magician, and rock star.

Josh and Sophie Newman are the world's only hope. If they don't turn on each other first.

This was a fun second book to the Nicholas Flamel series. In this book, jealousies grow, threats sky rocket, and the line between good and evil blur.

Sophie is dealing better with her awakened powers. She know knows how to control Air and Fire. She has The Witch of Endor's memories and knows far more than any fifteen-year-old should. Yet, she is dealing fairly well.

Josh is growing more and more jealous of his sister's growing power. He feels distant from her, something he's never experienced before. He wants to be as strong as her. And that's what leads him into trouble.

Nicholas aka Nick is very enigmatic. He's hard to read, and the twins are trusting him less and less every second. What's his plan? Why does he want the twins so much? We know the bad guy, Dee, wants them to destroy the world. So what does Flamel want? He seems like he wants to save the world, but his motives and actions aren't that clear.

Pernelle Flamel is wicked awesome. I like her. She is strong and no force can contain her. I really hope she and Nick turn out to be good guys.

Scathach aka Scatty is my favorite. An old Celtic warrior maiden. She can kick some serious butt and does actually seem genuine. She is really the only one the twins can trust. Let's hope she decides to come back.

I love the depth of this series. The amount of legends, history, and mythologies is almost mind blowing. I love when I can dive into a book where it not only gives me a fantastic adventure, but a touch of history! History was never my favorite subject, but learning about it this way makes me smile. It's not even an outpouring of information, either. It is subtly placed as villains and threats. Love it.